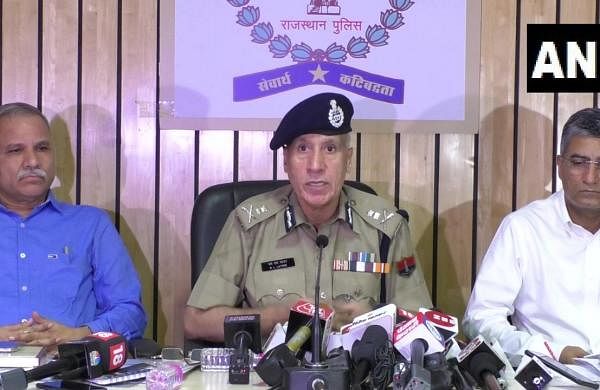 JAIPUR: One of the two prime accused in the brutal killing of a tailor in Udaipur has links with the Pakistan-based organisation Dawat-e-Islami and had visited Karachi in 2014, the Rajasthan Police chief said on Wednesday.

The police have detained three more people in connection with the killing so far, Director General of Police (DGP) M L Lather said at a press conference here.

Two men, identified as Riaz Akhtari and Ghouse Mohammad, allegedly hacked Kanhaiya Lal to death with a cleaver at his shop in Udaipur on Tuesday and posted videos online saying they are avenging an insult to Islam.

The duo was taken into custody on Tuesday and booked under the Unlawful Activities (Prevention) Act and the various sections of IPC, the police chief said.

“One of the accused, Ghouse Mohammad, has links with the Karachi-based Ismalist organisation Dawat-e-Islami. He had visited Karachi in 2014. So far, we have detained five people, including the two prime accused,” Lather said.

When asked whether both the accused had links with Dawat-e-Islami, Lather said that it cannot be ruled out as both of them were equally involved.

Lather said that looking into all the perspectives and on directions of the chief minister, it was considered as act of terror, so investigation was started after registering a case under the UAPA.

A team of the National Investigation Agency (NIA) has arrived in Udaipur, he said, adding the case has been transferred to the NIA and state police will assist them. Lather said Ghouse Mohammad in 2014 had visited Dawat-e-Islami, Karachi.

The outfit has its offices in Mumbai and Delhi, he said. Detained accused Riaz works as a welder and Ghouse is into some petty works. “It is also found that the distinct weapon used to hack Kanhaiya was made by Riaz around four-five years ago,” said the DGP.

On the trans-border connection of the two prime accused, he said all digital evidence is being looked into.

Lather also mentioned about the case lodged against Kanhaiya Lal on June 10 by one Nazim at Dhan Mandi police station over an alleged objectionable post hurting sentiments of a community.

On June 11, Kanhaiya was arrested and released on bail the next day, he said.

On June 15, Kanhaiya filed a complaint at the police station that four-five people were following him and his life was in danger.

The SHO failed to assess the gravity of the situation and effective action was not taken on the Kanhaiya’s complaint, the state police chief said, adding the issue was resolved amicably without any legal action.

“The assistant sub-inspector was suspended yesterday, and today the SHO has been suspended for negligence,” he said.