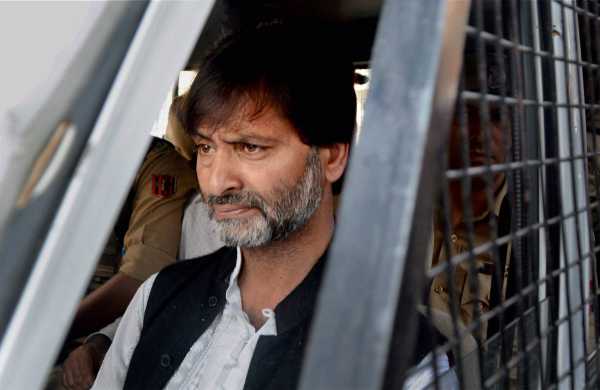 Malik is presently lodged in Tihar jail, Delhi, after he was arrested by the National Investigation Agency (NIA) in April 2019 in connection with a terror funding case, a month after his group was banned by the central government.

In March last year, the special TADA court had framed charges against the JKLF chief and six others in another case related to the gunning down of four IAF personnel on the outskirts of Srinagar in January 1990.

The 10 are among two dozen accused named by the CBI in its charge-sheet filed before the TADA court. Among the others, Mohammad Rafiq Dar and Mushtaq Ahmad Lone — both top commanders of JKLF– are dead and 12 others are absconding.

Rubaiya Sayeed was kidnapped by JKLF members on December 8, 1989, from Srinagar to ensure the release of their associates lodged in different jails.

“…From the confessional statements of the accused persons recorded, either under Section 164 CrPC or under Section 15 of TADA Act, supported with the statements of the abductee Rubaiya Sayeed and other prosecution witnesses, it has been prima facie proved that the accused persons have hatched a criminal conspiracy to kidnap the abductee with sole objective to get their persons released from the custody after having negotiation with the Government of J&K as well as Government of India and the accused persons had also succeeded in their nefarious designs and got their persons released from the custody.

Hence, the court said, the charges are required to be framed against each of the accused persons, separately, for the delineated offences.

During the investigation, accused Ali Mohammad Mir had voluntarily made the confessional statement under Section 164 CrPC before the Magistrate, whereby, he had admitted his role in the commission of offence as well as disclosed the role played by the other accused persons.

Another accused Mohammad Zaman Mir had in the same manner made confessional statement under Section 164 CrPC before the concerned Magistrate and had disclosed his own role and the roles of other accused persons in the commission of the offence, the court said.

It said the accused, Iqbal Ahmed Gandroo, had also made confessional statement admitting his guilt and role played by him in the whole occurrence. Besides, the accused persons namely Rafiq Pahloo, Wajahat Bashir, Manzoor Ahmed Sofi and Showkat Ahmed Bakshi had made their confessional statements before Prakash Mishra SP CBI, which is found to be admissible in evidence under Section 15 of TADA Act, the court added.

“Since the accused persons besides admitting of their own guilt have also narrated about the participation of other accused persons namely Yaseen Malik, Javed Ahmed Mir and Mehraj-U-Din Sheikh, which can also be used against them as one of the piece of evidence,” the court said.

It said the investigating agency has also conducted Test Identification Parade of the accused persons, Ali Mohd Mir, Mohd Rafiq Dar and Mohd Iqbal Gandroo, as per the provision of Section 9 of the Evidence Act and during that proceedings the abductee had identified them and disclosed about the individual participations of each of the accused persons in the commission of offences.