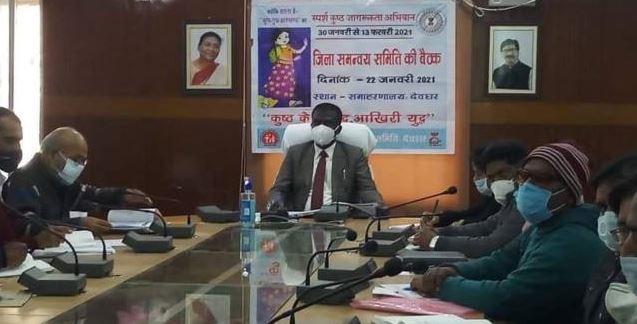 According to the release issued by Chief Medical and Health Officer Kondagaon, under the National Leprosy Eradication Program, on February 04, under the Sparsh Leprosy Awareness Campaign at the Government Nursing Training Center, the students were sworn in to fight leprosy disease as well as leprosy for girls. Competitive examination was also organized. A message was given to bring awareness among the people towards Leprosy eradication program. Leprosy is not incurable, to deal with it, MDT pill is available free in the health center, people should take advantage of it and appealed to spread the message in the area around them.
To prevent leprosy infection under the National Leprosy Eradication Program, Spontaneous Leprosy Awareness Campaign (SLAC) was conducted from January 30 to February 03 in all the development blocks of the district. Presently, 39 leprosy patients are being treated in Kondagaon district. Similarly, publicity is being organized from January 30 under the leadership of Dr. TR Kunwar, Chief Medical and Health Officer. The training center’s principal and his staff, leprosy assistants and employees of the National Health Mission participated in this program.