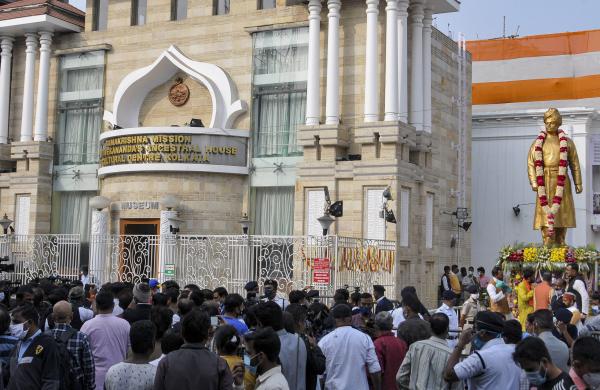 By PTI
KOLKATA: Swami Vivekananda’s 158th birth anniversary was celebrated on Tuesday across West Bengal with political leaders and people making a beeline at his ancestral house here to pay tributes to him.

Months before the assembly elections, both the BJP and the TMC are involved in a political one-upmanship over claims on Bengal’s culture and heritage.

A towering spiritual philosopher, Vivekananda, was born in 1863 in Kolkata and is credited for popularising the Vedantic ideas.

” Paying tributes to Swamiji, West Bengal Chief Minister Mamata Banerjee said, “His message of peace and universal brotherhood is of utmost relevance today and inspires all of us to strive hard in safeguarding these ideals in our beloved nation.

” Adhir Ranjan Chowdhury, leader of the Congress party in the Lok Sabha, said the spirit that the great saint imparted to the world is eternal.

“The solution of all human problems lies in his noble and divine thoughts,” Chowdhury wrote on the microblogging site.