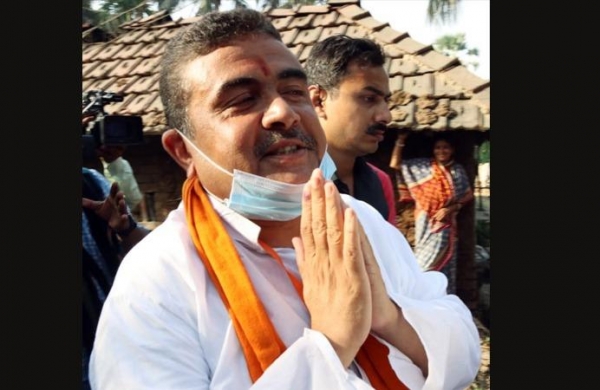 By PTI
TAMLUK/KOLKATA: Amid the nationwide row over alleged snooping activities with Pegasus spyware, Leader of Opposition in the West Bengal Assembly, Suvendu Adhikari, stoked a controversy when he said that he got access to call details of Purba Medinipur district SP Amarnath K, prompting the police on Tuesday to file suo motu cases against him.

Adhikari, during a party meeting in the district’s Tamluk area on Monday, had also publicly advised the local police chief to “refrain from doing anything that might lead to his transfer to Kashmir”.

Taking cognisance of his remarks, the district police, during the day, filed suo motu cases against the BJP MLA and 14 of his aides under various sections of the IPC, including one dealing with the Disaster Management Act for holding a rally without permission, and another related to deterring a public servant from performing his duty.

The senior BJP leader, in his message to the district superintendent of police (SP), had said, “Do not file fake cases. I have evidence to prove that they are fake and politically motivated. I will file public interest litigation seeking a CBI probe into such allegations. Please do not do anything that would lead to your transfer to Kashmir’s Anantnag or Baramulla.”

The saffron party legislator is facing multiple probes, one of which involves alleged tarpaulin theft.

The Nandigram MLA, who narrowly defeated Chief Minister Mamata Banerjee in assembly elections held earlier this year, also said, “I have details of all calls made to you (SP and other police personnel) by the office of the nephew (TMC MP Abhishek Banerjee),” and added that “if you have the state government’s support, we have the Centre by our side”.

Citing the example of former Kolkata police commissioner Rajeev Kumar, who the CBI had grilled for his alleged involvement in chit fund cases, Adhikari said it would be best if police officers carry out duties without bias.

He hailed the NHRC report on Bengal’s post-poll violence, which noted that the situation in the state is a manifestation of “law of the ruler” and not the “rule of law”.

The leader of opposition added that he would hold a mass agitation in the district on August 9 with one lakh people to protest against all such “malpractices”.

The district SP, when contacted, said, “We have lodged suo motu cases against Mr Adhikari. He claimed he has call records. Since he is not working in the law enforcement, he can’t be having such devices (to record calls).”

The Nandigram legislator’s assertions at the party meeting have further triggered a war of words between the TMC and the BJP, with the state’s ruling party demanding Adhikari’s arrest for “illegally snooping into the phone of a public servant and threatening him with a transfer”.

“Suvendu Adhikari should be arrested immediately and interrogated in custody. He has proved that Pegasus was used to snoop on many people, including Abhishek Banerjee. It is a heinous crime. The Centre is misusing its powers,” said TMC state general secretary Kunal Ghosh.

The state BJP unit, however, came out in Adhikari’s defence and said if action is taken against Adhikari, TMC leader Mukul Roy should also be arrested for making similar allegations after switching over to the BJP in 2017.

“Suvendu Adhikari is a seasoned politician. He made the statements at a rally. If the police can lodge cases against Adhikari, then why is Mukul Roy being spared? “After joining the BJP, he said in an interview that the TMC government had tapped his phones. Was that statement true or false?” state BJP chief spokesperson Shamik Bhattacharya maintained.

Roy, who had quit the TMC in 2017 and joined the BJP, returned to the state’s ruling party last month.

The TMC has come down heavily on the BJP government at the Centre after party leader Abhishek Banerjee’s name apparently figured in the list of targets of the Pegasus spying operation, terming it as “an attack on democracy”.