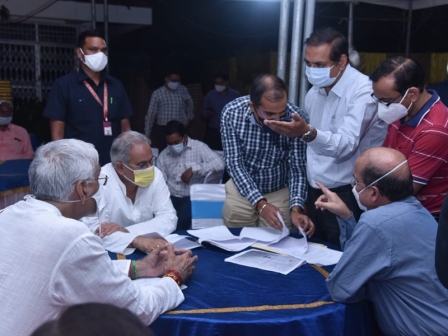 The Indian Medical Association delegation met Chief Minister Bhupesh Baghel, along with the parents of selected NEET students and Raipur North MLA Kuldeep Juneja, over the possibility of fraud for admission to medical seats in Chhattisgarh state.

Chhattisgarh Pradesh Congress Medical Cell and Hospital Board President Dr. Rakesh Gupta informed that admission is being taken by the students from outside states through the MBBS and suspicious Native Certificates in all the various medical courses in government and private medical colleges of Chhattisgarh. CM has ordered an inquiry into the whole matter.

Chief Minister Bhupesh Baghel has meticulously inspected the documents with meaningful arguments by the parents and assured the delegation that the interests of the Chhattisgarhi indigenous students are committed to protect their government in all respects. The Chief Minister has developed a transparent complaint and investigation system from Additional Chief Secretary Health Renu Pillay, Director Medical Education Dr. RK Singh and Neet Counseling Committee Chairman Dr. Vineet Jain to test the original documents of the selected students. It is directed to make sure.

They have been told that upon receipt of complaints of students for admission in many states, their certificates should be strictly examined at every level and it should be ensured that there is no fraud for admission in medical seats. Health Minister TS Singh, Dev PWD Home and Jail Minister Tamradhwaj Sahu, Agriculture Minister Ravindra Choubey and others were present during the detailed talks with the Chief Minister.