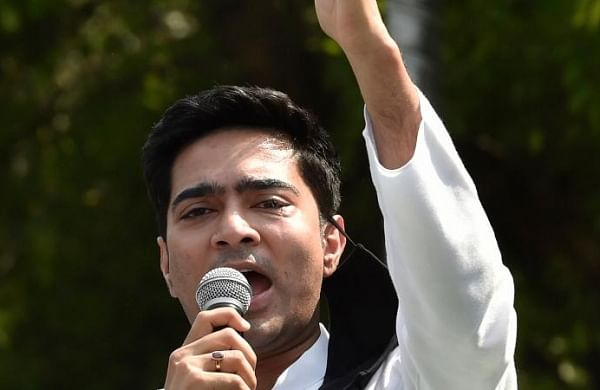 KOLKATA: Trinamool Congress national general secretary Abhishek Banerjee Wednesday said the suspension of six party MPs in Rajya Sabha during the day for protesting against the Pegasus snooping controversy has proved that Prime Minister Narendra Modi regime has conceded defeat in the case and vowed to carry on the “fight for truth”.

Reacting to the action of Rajya Sabha Chairman M Venkaiah Naidu, Banerjee tweeted: “YOU CAN SUSPEND US BUT YOU CANNOT SILENCE US”.

The state BJP claimed the TMC members’ action in the Rajya Sabha belied the dignity of the House.

Naidu suspended six TMC MPs for the day for carrying placards while protesting along with other opposition MPs over the Pegasus spying issue.

The MPs had trooped into the well of the House, some holding placards, to demand a discussion on the issue of Israeli-made, military-grade Pegasus spyware allegedly being used to snoop on opposition leaders, government critics and journalists.

The RS chairman had taken exception to the placards.

Reacting to the suspension, Banerjee said on the microblogging site “The crackdown on our MPs clearly indicates that @BJP4India’s 56-inch GODFATHER has CONCEDED DEFEAT!” Banerjee’s allusion to “56-inch” was apparently to the oft mentioned 56-inch chest of Modi by the BJP to signify his stature as a leader.

“We will not budge an inch to fight for our people & to fight for the truth  Until the last drop of our blood – BRING IT ON!,” tweeted Banerjee, whose convoy came under attack on Monday in BJP-ruled Tripura where he had gone to meet TMC members in view of the assembly election in the North-eastern state in 2023.

He also attached a photo of the RS chairman’s order with the tweet.

Commenting on the action taken against six TMC MPs, BJP state general secretary Sayantan Basu said they were creating nuisance inside the House, which is is unacceptable and contrary to the dignity of Parliament.

“The TMC is talking about discussion (on the snooping controversy) but in the West Bengal assembly, it does not tolerate discussion.

Bills are passed through guillotine method without discussion,” he told PTI.

BJP spokesman Shamik Bhattacharya alleged that more than 33 party activists were killed in the state since the declaration of the assembly poll results.

“To divert attention from its own misdeeds, which had been flagged by National Human Rights Commission, TMC MPs are resorting to disruption in both Houses,” he said.