Suspended cop Sachin Vaze moves HC against arrest, says he was made ‘scapegoat’ 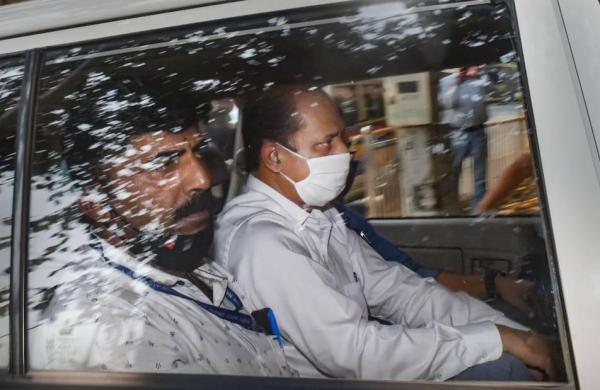 By PTI
MUMBAI: Suspended police officer Sachin Vaze on Monday filed a ‘habeas corpus’ petition in the Bombay High Court, challenging his arrest by the NIA in connection with the recovery of an explosives-laden SUV near Mukesh Ambani’s house.

Vaze, an assistant police inspector with Mumbai police, was arrested by the National Investigation Agency on Saturday for his alleged involvement.

The petition, filed through his brother Sudharm, claimed that Vaze (49) was made a “scapegoat” by “certain political powers”.

A Habeas Corpus petition is usually filed to challenge ‘illegal’ detention or arrest.

The plea, moved by his lawyer Sunny Punamiya, sought a direction to the NIA to produce Vaze before the HC and to prove that due procedure was followed during the arrest.

The police officer was not provided a copy of the FIR and he was also not explained the reasons for arrest, nor was his family informed, the petition said.

The haste with which he was arrested showed that the central agency acted with malafide intentions, it alleged.

The NIA is probing the recovery of an explosives-laden Scorpio near industrialist Mukesh Ambani’s multi-storey house `Antilia’ here last month.

The case was taken over by the NIA after the mysterious death of Thane-based businessman Mansukh Hiran who had claimed the vehicle had been stolen from his possession.

The petition said the allegations made by Hiran’s wife, blaming Vaze for her husband’s death, were false.

After the Maharashtra Anti-Terrorism Squad registered an FIR against him, the “entire media fraternity and society started targeting” him as they wanted a “scapegoat to pin this entire conspiracy on”, Vaze claimed.

The petition is yet to be listed for hearing.