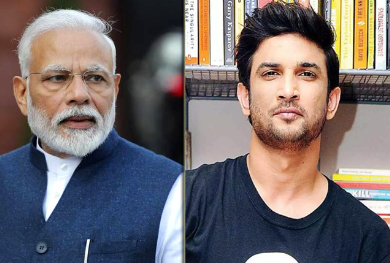 Sushant Singh Rajput’s friends Smita Parikh and Nilotpal Mrinal have taken to social media to request Prime Minister Narendra Modi for justice for the late actor. It’s been several weeks since the CBI has taken over the case but no breakthrough has come yet.
Talking about the NCB probe that has been focussed on currently, Sushant’s family lawyer recently voiced his displeasure over the new course this death probe has taken. On the other hand, SSR’s friends have now taken to social media and requested PM Modi for justice. Taking to Twitter, Smita Parikh wrote, “We had appealed tp ypu from across the globe @narendramodi @PMOIndia regarding justice for sushant singh rajput it’s a brutal murder happened right under your nose sir we the people of india want fair justice for @itsSSR the entire globe has huge hopes from you.” Meanwhile, another friend of the late actor shared a banner pasted outside his residence where he was found dead. The #JusticeforSushantSinghRajput banner read the message ‘I was one of you. Do you deserve justice? So do I.’ Check it out here: