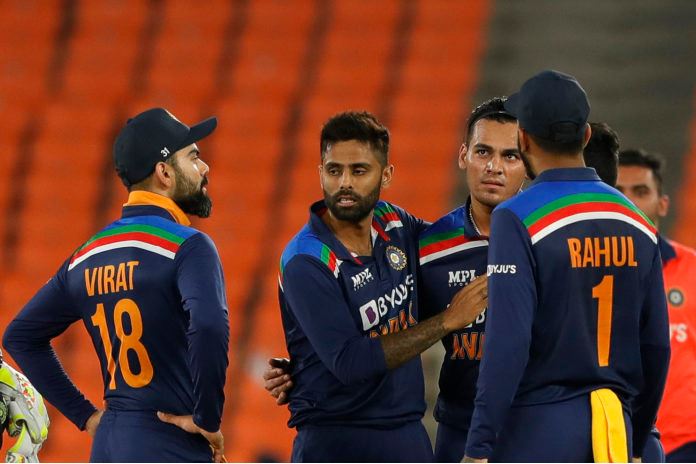 A blistering half-century from Suryakumar Yadav, followed by a brilliant performance from the bowlers, helped India beat England fourth T20I of the ongoing five-match series at the Narendra Modi Stadium on Thursday evening.

With the eight-run win over England, India have levelled the series 2-2 with the series decider to be played on Saturday at the same venue. Chasing 186, Jason Roy and Jos Buttler opened the innings for the side. Bhuvneshwar Kumar started with a maiden over just the way India wanted. From the other end, skipper Virat Kohli brought Hardik Pandya into the attack. Pandya also did not concede many runs in his over.

Buttler was not able to soak the pressure and got out against Bhuvneshwar in the third over after scoring nine runs off six balls.

Dawid Malan, who came in to bat at number three, along with Roy kept the scoreboard moving and made full use of the powerplay overs. The duo added 45 runs for the second wicket stand before Rahul Chahar removed Malan (14) in the eighth over.

In the next over, Pandya sent Roy back to the pavilion. The right-handed batsman played a fiery knock of 40 runs off 27 balls. After Roy’s dismissal, England’s score read 66/3 in 8.5 overs.

However, Jonny Bairstow and Ben Stokes continued scoring runs at a brisk pace and kept England in the hunt. The duo smashed the ball to all parts of the ground and added 65 off just 36 balls for the fourth wicket.

In the 15th over, much to India’s respite, Washington Sundar removed Bairstow (25). Skipper Eoin Morgan joined Stokes in the middle.

Pacer Shardul Thakur brought the hosts back in the game as he scalped two crucial wickets of Stokes and Morgan on successive balls in the 16th over. Thakur picked Stokes (46) on the first ball and on the next delivery, he removed Morgan (4) to leave the visitors reeling at 140/6.

Stokes’ knock came off 23 balls, studded with three sixes and four fours.
Sam Curran (3) and Chris Jordan came to rescue the side but the former failed to get going and was dismissed by Pandya in the 18th over.

In the last over, England needed 23 runs and the visitors accumulated 11 of the first three balls but Thakur came back strong and gave three runs off the next three balls, including Jordan’s (12) wicket. Jofra Archer remained unbeaten on 18 off eight balls as England reached 177/8 in their allotted 20 overs.

For the hosts, Thakur bagged three wickets while Pandya and Chahar claimed two scalps each.

Collector Dr. Bhure gave the responsibility to the nodal officers for the organization and overall arrangement of division level Chhattisgarh Olympics

You kept your promise, took us in a helicopter