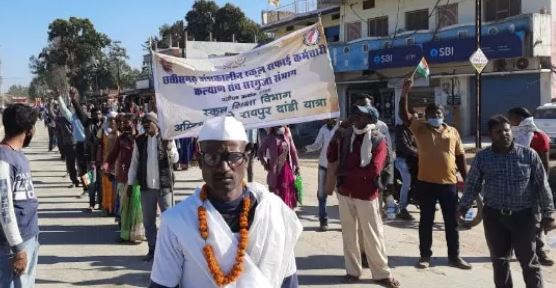 More than three hundred cleaners of Sarguja division reached Raipur today demanding full time including salary increase. The Dandi Yatra of the sanitation workers who left from Ambikapur reached the capital at 11 am today.
A large number of women are also involved in the walk of the sweepers. Please tell that under the banner of Chhattisgarh Part-time School Safai Karamchari Kalyan Sangh, Dandi Yatra of Safai Karmachari took off from Ambikapur on 16 January which reached the capital today.
Hundreds of employees and women have joined the demonstration. Along with the women, their children have also reached Raipur. At the same time, they are raising their voice in the capital. The performance of the cleaning staff has been supported by the cleaning staff of the second division.