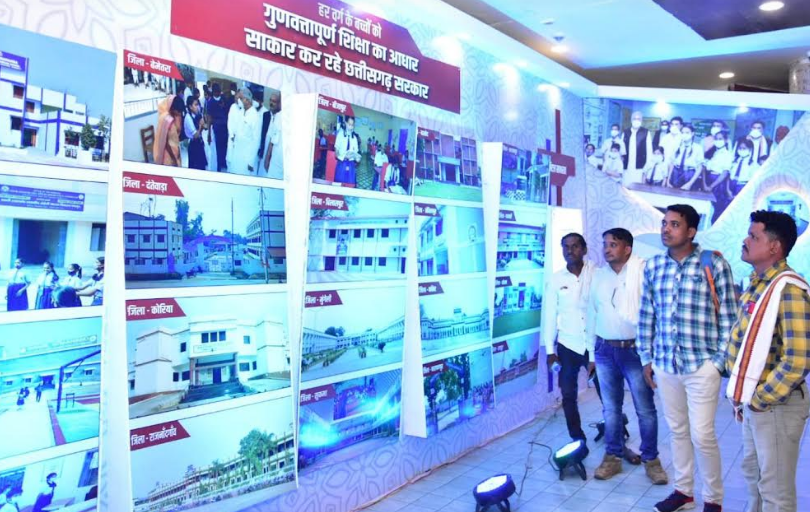 Under the leadership of Chief Minister Bhupesh Baghel, the discussion about the development happening in Chhattisgarh is happening not only in the country but also in foreign countries. Attractive photo exhibition of other schemes including Godhan Nyay Yojana, Suraji Gaon Yojana and Gauthan, Rajiv Gandhi Kisan Nyay Yojana, which became the basis for development of villages and prosperity of villagers, has been put up by the Public Relations Department in DDU Auditorium from May 21, which will run till June 22. . A large number of public representatives, panchayat officials and citizens of all age groups are reaching the exhibition every day. Panchayat officials and villagers also discuss the changes coming in the lives of villages and villagers through the Flagship schemes of Chhattisgarh government during the visit of the exhibition and appreciate the exhibition. Today on Wednesday, the Panchayat representatives of Dhamtari district came to see the development exhibition. Sarpanch of Village Panchayat Kauhabahra of Nagri block of Dhamtari district Shri Shiv Prasad Netam said that Rajiv Gandhi Kisan Nyay Yojana is a revolution in the agriculture sector. The input subsidy being provided to the farmers through this scheme has made farming profitable. People who have left agriculture have also started adopting agriculture. The Chhattisgarh government has promoted crop diversification in the state by providing input subsidy for all Kharif crops. It will have pleasant results. Apart from paddy, now the production of pulses, oilseeds and other crops will get a boost in Chhattisgarh. Ghotgaon Deputy Sarpanch Shri Krishna Netam said that cow dung has now become cow dung due to Godhan Nyay Yojana. This has increased animal husbandry and income. Shri Yograj Sahu, Shri Yugal Kishore Chandrakar, Shri Vritant Garg and their colleagues, who are preparing for competitive examinations, said that good information is being received about government schemes in the exhibition. Books and brochures published by the Public Relations Department will help people to understand and take advantage of the schemes of the government. The exhibition was appreciated by Mr. Gannu Ram of Karahiya Gram Panchayat of Nagari block of Dhamtari district, Mr. Vinod Nag of Ghotgaon and other panchayat representatives besides Ms. Apoorva Sharma of Raipur, Ms. Gunjan Shukla and their colleagues also appreciated the exhibition. Like this:Like Loading… Continue Reading