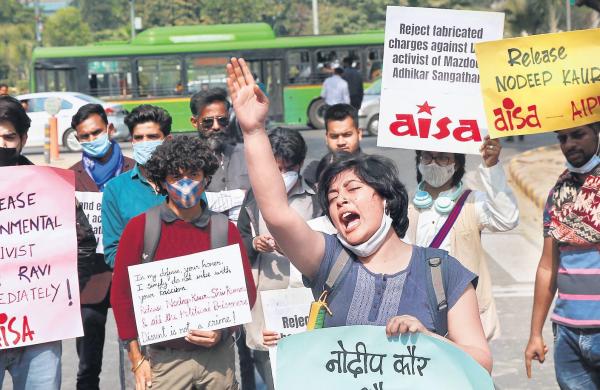 By Express News Service
NEW DELHI:  There was an outpouring of support for activist Disha Ravi from the opposition and global personalities even as a BJP leader drew parallels with terrorists and another got embroiled in a controversy over his tweet. Disha was arrested by the Delhi Police in connection with a ‘toolkit’ earlier tweeted by Swedish climate activist Greta Thunberg.

Congress leader Raul Gandhi led the charge for his party as he tweeted screenshots of articles related to Ravi’s arrest and posted: “India won’t be silenced.” Priyanka Gandhi Vadra, P Chidamabaram, Shashi Tharoor, Jairam Ramesh, Kapil Sibal chipped in to condemn the arrest. While Chidambaram urged students and youths to raise their voices against the ‘authoritarian’ regime, Ramesh dubbed the arrest as unwarranted harassment and intimidation.”

Haryana Home Minister Anil Vij was caught in his own web after Twitter sent him a notice following a complaint from a user in Germany regarding a tweet. “Whoever harbours the seed of anti-nationalism in their mind, that has to be completely destroyed, be it #Disha_Ravi or anyone else,” he had tweeted.  Later, Twitter said the tweet was investigated and “was not subject to removal”. “Accordingly, we have not taken any action as a result of this specific report.”

BJP IT chief Amit Malviya, meanwhile, smelt the role of the Left in this episode. “The Left has been using young impressionable minds as cannon fodder for their deranged politics for a long time. From JNU to Jamia, AMU to Nadwa and now Disha Ravi, are all part of their sinister plot…”  Like Vij, three-time BJP MP from Bengaluru PC Mohan went all out against the 21-year-old climate activist. “Burhan Wani was a 21-year-old. Ajmal Kasab was a 21-year-old. Age is just a number! No one is above the law. Law will take its  own course.”

A lawyer at Bombay High Court who volunteers for social work, Nikita Jacob has been alleged to have links with AAP. She, however, has denied her link with AAP in her affidavit in the Bombay High Court. Mo Dhaliwal, the Poetic Justice Foundation founder, contacted Nikita via his colleague Puneet who lives in Canada, the police claim. The motive was to create a Twitter storm ahead of Republic Day. According to her website, Nikita advises her clients to try settling civil disputes. Her Twitter handle that is locked has “Advocate, Bombay High Court” mentioned in her bio

Farmer’s son who dabbled in business before activism

Environment activist Shantanu Muluk hails from Beed district in Maharashtra, but studied and has been living in Delhi for last several years. His parents, who are farmers by profession, are worried about their son. The Delhi Police visited the family  in Beed as it is looking out for him in connection with the toolkit case. “Shantanu’s mobile phone is switched off. We last spoke with him few days ago. In lock-down, he was with us only. He studied in Aurangadbad and even did some small business in Pune before moving to Delhi. It is true that he was worried about the farmers and their protest in Delhi. It is natural as son of the farmer to concern about farmer community,” his parents said.