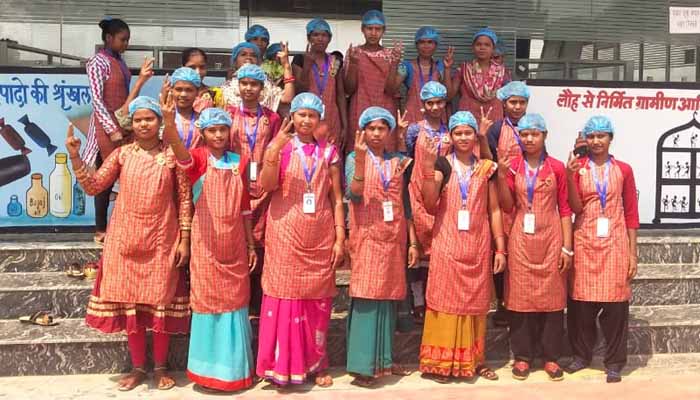 If women are to be empowered, then along with their education it is necessary to make paths of economic empowerment. It is also necessary to give them safe opportunities to move forward with authority. With the idea that financially empowered women can take the whole family forward with them, Chief Minister Bhupesh Baghel has adopted a policy of self-reliance with empowering women in Chhattisgarh. It is the result of the policies adopted for the progress of women and their protection that according to the India Index report for the year 2020-21 released by NITI Aayog, Chhattisgarh ranks first in gender equality. Here women are participating in Panchayats with 50 per cent share. The ownership and control of women has been ensured as per the law over land and property. In order to protect the rights of women in government services, a system has been made to compulsorily have a woman representative in the committees formed for the tasks of recruitment, promotion, scrutiny of documents. Along with this, the facility of 30 percent reservation in government posts has been ensured. Rural women have been given a big right to make policies for themselves with 50 percent reservation in the form of Gram Sabha members in the District Mineral Trust Fund Board. New initiatives have been taken for Women have been linked with economic activities in Gauthans through Godhan Nyay Yojana. Women account for about 45 percent of this. Women in Gauthans are preparing various products including Vermi Compost, Super Compost production. Their share in the sale of finished manure has also been ensured. A provision has been made to give 90 paise to the concerned self-help group out of the dividend amount for the sale of common cow dung manure. Along with this, many important tasks like running government fair price shops, preparing food for the children of Anganwadi and mid-day meal in schools have been given to a large number of women. The honorarium of Anganwadi workers and helpers has been increased. In order to increase the participation of women self-help groups in the allocation of fair price shops under the public distribution system, it has been decided to increase their experience qualification to 3 months instead of 3 years. Strengthening the path of economic empowerment of widows, abandoned, destitute women Along with giving them loans at low interest through Mahila Kosh, training is also being given for skill upgradation. In order to connect women with new economic activities, Chief Minister Bhupesh Baghel has waived off timeless loans worth Rs 12.77 crore from groups related to Mahila Kosh. He has not only waived off loans of women groups but has also increased the loan limit by two to four times. Along with this, it has also been decided to increase the loan given by Mahila Kosh by 5 times. For women’s self-reliance, tribal women of Vananchal along with villages and cities have also been kept in mind. Denex Garment Factory run by women in remote Naxal affected Dantewada and Denex brand is now making its mark in the country and the world. While the state government’s decision to add more than 50 thousand members of the women’s group to the business of forest produce, tribal and rural women have got financial strength, while the addition of 10 thousand women in the Mission Clean City project has increased the share of maternal power. have been found. Under Chhattisgarh State Rural Livelihood Mission, Bihan, 1 lakh 85 thousand women from about 20 lakh poor families are associated with self-help groups in the state. Four thousand sisters have become a mobile bank in the form of BC Sakhi. The state government has included new concept like Rural Industrial Park and C-Mart store in the budget. The Multi Skill Center at Ganiyari, Bilaspur, set up at a cost of about Rs.3.81 crore in an area of ​​5 acres, has become a major center for empowering women by making them proficient in various fields of production. In fact, behind the Pauni-Pasari scheme in cities and Rural Industrial Park in villages, there is a plan to further the power of women. For the advancement of women, not only the basis of economic strength has been prepared, but in order to provide a safe and fear-free environment for working, women hostels have been started in every division along with working hostels in district headquarters. 2 thousand 200 new posts of women home guards have been created in girls hostels and ashrams. There are women help desks in 370 police stations for help, so that women can move forward with strength. Along with economic strength and security, the avenues of higher education have been opened for women with the opening of new women’s colleges in 9 district headquarters. The system of girls hostel in Livelihood Colleges has made the path of skill development of women easier. Along with this, a large number of women are coming forward to study due to the system of free education till post-graduation, due to which the number of girls in colleges has exceeded that of boys. The positive effect of Chhattisgarh’s policies and safe environment is now coming to the fore in the form of increasing participation of women in the economy of Chhattisgarh. This lofty beginning of the spirits of the working women of Chhattisgarh will surely come in the form of a golden future. Like this:Like Loading… Continue Reading