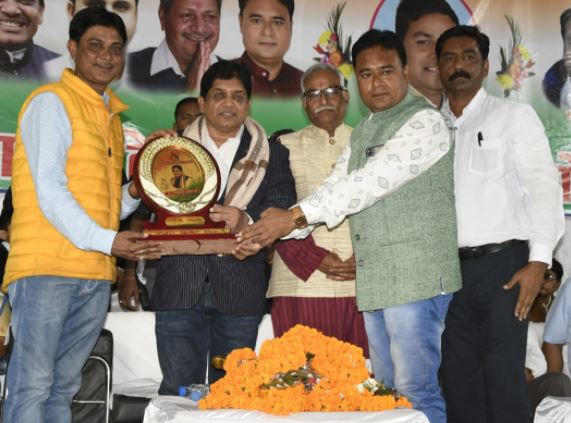 Shivkumar Dahria inaugurated the Self Shri Kamlesh Garg Smriti Cricket Competition organized at Balodabazar. During this, he said that sports like cricket have a lot of importance. Therefore this game is very popular and all the small and big people from village to city play this game. This game is as good to play as it is a pleasure to watch. This gives an opportunity to advance in the field of sports with physical development. He said that such an event in Balodabazar area will also prove to be important in raising rural talent.
At the Chakrapani High School Sports Ground in Balodabazar, Minister Dr. Dhariya opened the competition by getting acquainted with the players and batting and tossing. He said that the government of Chhattisgarh is also working towards advancing sports and sportspersons. Sports are organized at the block, district and state levels through the Department of Sports and Youth Welfare. Organizing sports definitely gives an opportunity to join the sports and events organized by the government and the department. Along with the promotion of sports by the government, sports grounds are also being developed. He appealed to the players to play with the spirit of the game and not be disappointed with the win-win. Late Shri Kamlesh Garg was also remembered at the venue. Shield and citation will be given on getting first place in the competition with Rs. 111111, second place with Rs. 55555. 64 teams from other states including Chhattisgarh have participated in the competition. Chief guest Dr. Dahria also honored the players. During this, Chairman of Farmers Welfare Board Mr. Surendra Sharma, Mr. Hitendra Thakur, former MLA Mr. Janak Ram Verma, Mr. Vidyabhushan Shukla, Mr. Dinesh Yadu, Rupesh Thakur, Vikram Giri etc. were present.