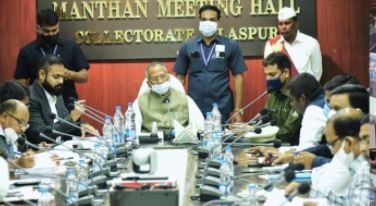 Public Works and Home Minister and in-charge of Bilaspur district, Mr. Tamradhwaj Sahu reviewed the departmental work by meeting district officials at Bilaspur Collectorate today. He instructed to expedite the repair work after digging of roads by the Municipal Corporation and also to remove the bad trains parked on the roadside so that traffic is not disrupted.
Minister Shri Sahu instructed to continuously raid hotels. He asked for constant monitoring of hookah bars and other activities in hotels. For this, teams of Health, Excise, Police and Food departments were formed and asked to edit this work. He instructed the RTO to make licenses by setting up camps.
In the meeting, the minister said that the Gauthans should be made multi-purpose centers and ensure the market access of products made by self-help groups. He praised Sailor Gothan of Bilha development block and asked to develop other Gothans along the same lines. Shri Sahu also instructed to make more and more Gauthan in urban areas. He also directed for continuous monitoring of Narva, Garuva, Ghurwa, Bari.
In the meeting, the Chief Executive Officer of the District Panchayat informed that under the Godan Nyaya Yojana, 1 lakh 3 thousand 431 quintal cow dung has been purchased and an amount of more than Rs 2 crore 6 lakh 86 thousand has also been paid to the cow owners. has gone. 1868 quintal vermi manure has been produced in Gothan. Out of which 1 thousand 77 quintal vermi fertilizer has been sold. 3 thousand 319 vermi tanks have been sanctioned in Gothan, out of which 3 thousand 102 vermi tanks have been completed. As many as 330 platforms have been built in the Paddy Procurement Centers under MNREGA. Minister Shri Sahu said that construction of sheds in the platforms, speeding up of the Chief Minister’s Nutrition Campaign, tourism development, loan book, nomination, Batwara etc., law and order, drinking water, farm development, public service guarantee, planning and road development works conducted by the Antyapasayi Corporation Also reviewed.