SP legislators stage protest outside UP assembly in support of farmers 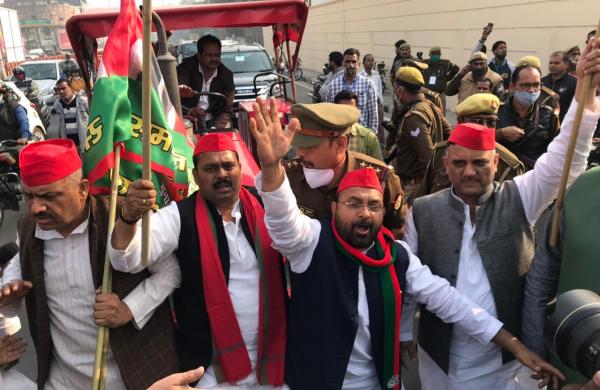 By PTI
LUCKNOW: Samajwadi Party legislators on Thursday staged a protest outside the Uttar Pradesh assembly here in support of the farmers’ agitation before the beginning of the state’s budget session.

Raising slogans against the government and in favour of farmers, the SP lawmakers sat before the statue of former prime minister and kisan leader Chaudhary Charan Singh in the Assembly and demanded that the Centre’s three new agri laws be repealed.

They also carried banners and placards criticising the state government for the alleged rise in crime against women, hike in LPG, petrol and diesel prices and pending cane dues among others.

Earlier, some legislators arrived on a tractor carrying the party flag and sugarcane as a mark of protest but were stopped by policemen.

“These things are symbols of agriculture.Cane prices have not been increased but the prices of diesel and petrol have been hiked several times,” said a legislator when asked why he had come to the Vidhan Sabha on a tractor.

Udayveer Singh, a member of legislative council, said issues are discussed inside the House while action is shown on the roads.

“The tractor is a symbol of the country’s prosperity.The green revolution and increase in income of farmers happened because of tractors.To give the message that the SP is with the farmers and will fight for them, we decided to come to the Vidhan Sabha on a vehicle (tractor) that is identified with farming,” he said.

The budget session of the Uttar Pradesh Assembly begins on Thursday with the address by the Governor.

The state budget is scheduled to be tabled on Monday.