‘SP had set up a new LAB, it’s Loot, Aatankwaad and Bhrashtachar’: Amit Shah attacks rivals in UP 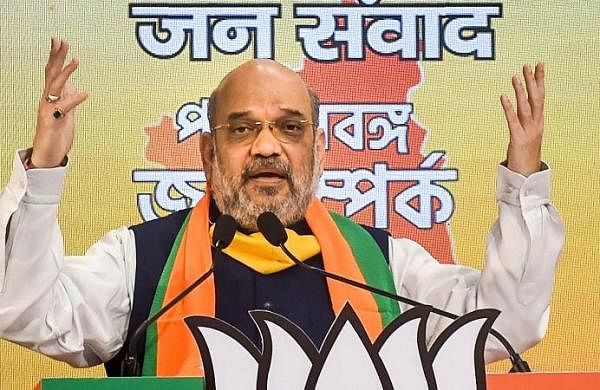 LUCKNOW: Union Home Minister Amit Shah on Thursday hit out at previous UP governments for failing to stop communal riots and claimed that under Yogi Adityanath, rioters could not dare to raise their eyes.

In Aligarh, the city of locks and the seat of Aligarh Muslim University, Shah took a swipe at Samajwadi Party saying its government had set up a new ‘LAB’ in the state.

Expanding the acronym ‘LAB’, Shah said: “In SP’s LAB, L stands for Loot, A for Aatankwaad and B for Bhrashtachar (loot, terror and corruption). The development of Uttar Pradesh is not possible under Samajwadi Party.”

Launching an attack on Bahujan Samaj Party (BSP), Shah took a dig at BSP chief Mayawati asking her to step out and campaign a bit as the elections were round the corner. “Sister’s cold has not gone away yet. Oh, sister! The election is here, come out a little bit,” exhorted Shah adding that else afterwards she would take the excuse of failing to do a campaign for losing elections.

In the other public rally in Moradabad later in the day, the home minister coined another acronym — NIZAM — to launch a broadside on the previous Samajwadi Party government led by Akhilesh Yadav.

“Nizam means governance but for Akhilesh Yadav, it means – N for Nasimuddin, I for Imran Masood, Z and A for Azam Khan, and M for Mukhtar Ansari,” elaborated Shah.

He asked the people to choose between Akhilesh’s Nizam with that of Yogi-Modi’s development Nizam. Shah accused Azam Khan of grabbing 1,000 hectares of land illegally and cautioned the people that if they supported SP, Azam Khan would come out of jail.

The tenure of the current Uttar Pradesh Assembly ends on May 14.