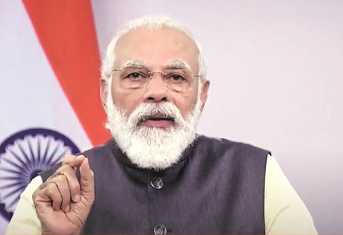 Those opposing farm laws are insulting farmers,” Prime Minister Narendra Modi said today, hitting out at the opposition a day after Punjab Youth Congress workers set a tractor on fire near India Gate in the heart of Delhi during protests against the controversial farm laws, which have triggered widespread agitations in several states.

“Several reforms, related to farmers, labourers and health, were brought during the recently concluded Parliament session. These reforms will strengthen labourers, youth, women, farmers of the nation. But the nation can see how some people are opposing it just for the sake of it,” PM Modi said while inaugurating development projects in Uttarakhand though video-conferencing.

“They are insulting the farmers by setting fire to the machines and equipment that is worshipped by them,” he said.

The Prime Minister accused those against the farm laws of “misleading farmers” over the minimum support price or MSP. “There will not only be MSP in the country but also the freedom for farmers to sell their produce anywhere. But some people are unable to tolerate this freedom. Their one more medium to earn black income is finished,” he said.

A tractor was set on fire near India Gate on Monday morning, a few hundred metres from the Rashtrapati Bhavan and parliament. The Punjab Youth Congress took responsibility for the burning of the tractor.

“We have to make noises and make the right kind of noises… We are not in the government. We can only fight on the streets. We are street fighters,” Brinder Dhillon, Punjab Youth Congress president, told NDTV. “This was the only way we could have made the deaf and dumb government hear,” he said, justifying the act. Without naming the Congress, PM Modi said the frustration of a party, which ruled for four generations, was at the root of this politics of opposition for opposition’s sake. “Frustration of a party which has ended up riding the shoulders of others despite wielding power for four  generations is behind this politics of opposition,” he said.