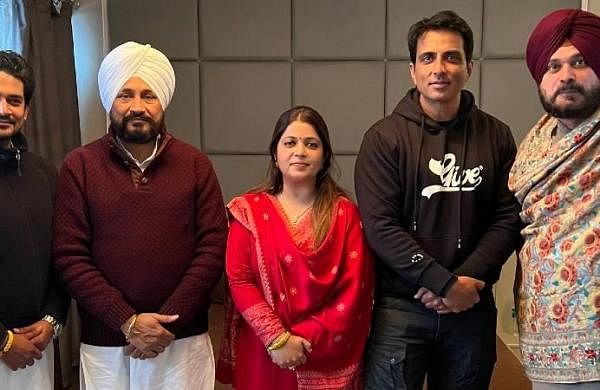 Malvika Sood’s joining the party will be a “game-changer”, said Punjab Congress president Navjot Singh Sidhu, who along with Channi, travelled to the Sood residence in Moga district for the joining in of the actor’s sister.

“It is very rare that a party (state) chief and the chief minister both have gone to someone’s home to grant the honour, and she deserves it,” said Sidhu.

Sonu Sood and Malvika Sood met Sidhu and Channi at Moga, but the actor was not present at the press conference when his sister joined the Congress.

Kamal, who is learnt to be not happy with the party backing her candidature, was also conspicuous by his absence.

The actor had last year in November said that his sister would join politics.

Asked if Malvika Sood will fight the elections from the Moga assembly constituency, Channi said, “Is there anything left to say now”, clearly signalling that she is the party’s choice.

On questions from reporters about Kamal’s candidature, Channi said, “Harjot Kamal is our MLA, he is very talented. He is my brother. We have worked together in the party and the government. We will take him together and if there is need for an adjustment, we will do that.”

“He is an asset to our party and he will be taken along,” the chief minister said.

Channi said in the party, everyone is taken along and sometimes, if anyone feels disappointed, things are sorted out.

He said before coming to Moga he had spoken to Kamal and added that he would be meeting him in the evening.

Asked that the MLA Kamal has reportedly said that he always remained available to his constituents round-the-clock which Malvika Sood may be unable to do, Channi said Malvika Sood is a strong and brave young woman, and she will be there to serve the people at any hour of the day.

“It is a matter of great happiness for us that a young woman who has earned a name for herself by running an NGO and dedicated herself to the people’s service is joining our party,” Sidhu said while welcoming her into the Congress.

Sonu Sood, who hails from Moga, had earlier also said that his sister has done a lot of “amazing” work in the past.

The actor is known for his humanitarian works not just in India but around the world, both Sidhu and Channi said while talking to reporters.

Sonu Sood had grabbed the national spotlight for helping migrants reach their home states during the nationwide lockdown clamped in 2020 in the wake of the COVID-19 pandemic.

Speaking on the occasion, Malvika Sood said she has taken the political plunge to dedicate herself to serve the people.

She also praised Channi, saying he has worked very hard despite getting a short time of just over 100 days.

Referring to Malvika Sood’s joining, Sidhu said, “In the cricketing world, it is called a game-changer.”

“She is an young and educated woman, a noble person, and her education as software engineer will help her in her life ahead,” Sidhu said.

He said that he would also like to congratulate and thank Sonu Sood as his sister had decided to choose the Congress.

Channi said Sonu Sood has made Moga, Punjab and the entire country proud with his acting and with his humanitarian works.

“It is a good sign for the Congress and Punjab,” said Channi on Malvika Sood’s joining.

“Politics is service and Malvika will dedicate herself to serving the people. In the coming five years, you will see that Sonu Sood will be known as Malvika’s brother (and not the other way round),” he said.

“Welcoming Malvika Sood Sachar, sister of Social Worker & Actor, @Sonu Sood into the party-fold. I am sure Malvika will serve the people with full honesty and integrity and help spread the message of the Congress party at the grass-root level,” Channi later tweeted.

In his initiative during the 2020 lockdown, Sood had arranged transport facilities for migrant workers stuck in various places while returning back to their homes amid joblessness and the lockdown.

His humanitarian work was highly appreciated by the public.

The Election Commission of India had annulled the appointment of actor Sonu Sood as Punjab’s “state icon”, state Chief Electoral Officer S Karuna Raju had said on Friday in an official statement, with the Bollywood star later saying that he voluntarily stepped down as a family member was contesting the upcoming assembly polls.