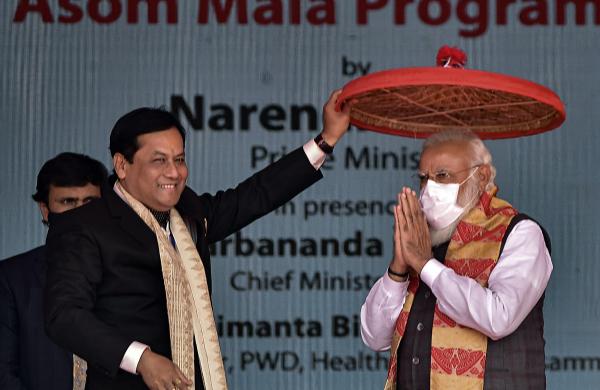 Express News Service
GUWAHATI: Prime Minister Narendra Modi on Sunday said some forces seated abroad were conspiring against India and they were not sparing even the Indian tea.

“As I talk about the tea workers, I want to tell you of a conspiracy hatched to defame the country. The conspirators have gone to such an extent that they are not sparing even the Indian tea. They are saying the image of Indian tea has to be tarnished worldwide, systematically,” Modi told a crowd after remotely inaugurating and laying the foundation stones of some projects at a programme in poll-bound Assam’s Dhekiajuli.

“The evidence that we have suggests the forces are seated abroad, ready to launch an attack on India’s tea-based identity,” the PM said without naming the forces.

He said the tea workers and each individual who drinks tea will seek an explanation from the political parties for maintaining silence on it.

“But I want to tell the conspirators that no matter how much you conspire, the country won’t allow you to succeed. The tea workers will win this battle. Those who are conspiring to launch an attack on Indian tea, they are not strong enough to confront the strength of our tea workers,” Modi asserted.

The PM underscored various steps initiated to better the lives of tea workers. He spoke about the Cha Bagichhar Dhan Puraskar Mela scheme under which the Assam government has transferred Rs 584 crore to the bank accounts of close to 7.5 lakh tea workers in three instalments.

“Assam’s happiness and progress are Assam’s tea gardens. The red tea of Sonitpur is known for its special flavour. Who knows the taste of Assam tea better than me? That’s why I always see the progress of tea workers with the progress of Assam,” Modi said.

He also made reference to a scheme of Assam’s BJP-led government under which pregnant tea garden women are handed a financial assistance of Rs 12,000. He lauded the government for sending mobile medical units to the tea gardens and supplying free medicines to the workers.

Stating that a special scheme entailing Rs 1,000 crore was announced in the Budget for the welfare of the tea community in Assam, he said this would make the lives of the workers easier.

Faced with a tough election, the BJP is trying to woo the tea workers in Assam. The state has 126 Assembly seats and in 40-42 of them, the votes of tea garden workers determine the fate of candidates.

The problems for the BJP increased in the aftermath of the formation of a Congress-led grand alliance of six Opposition parties and the birth of two regional forces.