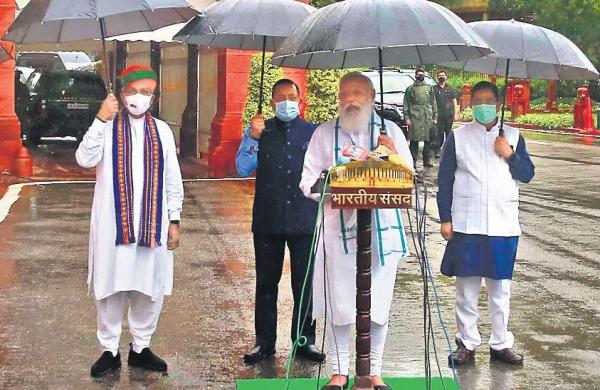 By Express News Service
NEW DELHI:  Prime Minister Narendra Modi on Monday couldn’t introduce new members of the Council of Ministers in both Houses of Parliament amidst uproar by the Opposition MPs over various issues. Modi lamented that the Opposition instead of appreciating the presence of a large number of women members in the Council of Ministers, was denying the opportunity of their introduction.

“A number of new ministers are women, besides those hailing from Other Backward Caste. The Opposition parties should have appreciated them, but they are not being allowing the introduction. Such a negative mind-set was never seen in the past,” he said.

With no order in the House, the Prime Minister said that the papers for the introduction of the new ministers be considered to have been laid on the table of the House.

On the first day of Monsoon session, the Opposition persisted with its  demands for the acceptance of the adjournment motions on a host of issues, including rollback of the central agriculture laws, phone tapping and others. The Lok Sabha witnessed repeated adjournments during the day, with the Speaker eventually adjourning the House for the day later in the afternoon.

Mukhtar Abbas Naqvi appointed deputy leader of RSThe BJP on Monday appointed Union Minister Mukhtar Abbas Naqvi as the deputy leader of the Rajya Sabha. Naqvi, who had earlier served as the Minister of State for Parliamentary Affairs, succeeds Union Minister Piyush Goyal, who was elevated as the leader of the Upper House.  The change in the leadership of the BJP in the Upper House was necessitated after former leader of the House and Union Minister Thawarchand Gehlot was made Governor of Karnataka. Naqvi, the only Muslim face in the Modi Cabinet, is known for having cordial relations with leaders from across the political spectrum. His cordial ties could come in handy for the ruling party.