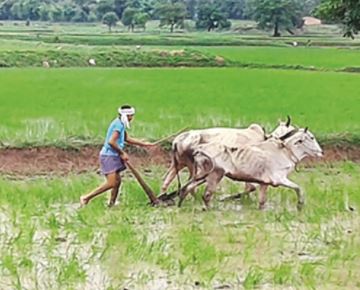 Today World Soil Day is being celebrated all over the world. Due to increasing pollution and the ever-increasing use of chemical fertilizers in agriculture, the soil production of the state is also getting worse. However, this problem is not only in Chhattisgarh or India, but fertile soil is becoming barren in many parts of the world. According to the scientists of the Indira Gandhi Agricultural University, due to ignorance, the farmers of the village are using more chemical fertilizers and insecticides than the greed for higher yields. Due to this the biological properties of the soil have started to decrease. As a result, the fertility of the crop is declining.

Initiating the cultivation of onion cultivation from cow-urine on about half an acre, took the initiative of organic and mixed chemical farming in KVK on five acres. The result was quite positive. Currently, many farmers are preparing organic farming, Ketchua fertilizer. It is to be known that in order to make farmers and general public aware of soil protection, the United Nations decided to celebrate World Soil Day on 5 December every year in 2013. The arithmetic of the ratios of nutrients, nitrogen, phosphorus, potas and micronutrients required for farm soils has gone awry. Due to this, the health of the soil is constantly falling. Seeing the deteriorating soil, the Central Government had started the Soil Health Card Scheme.