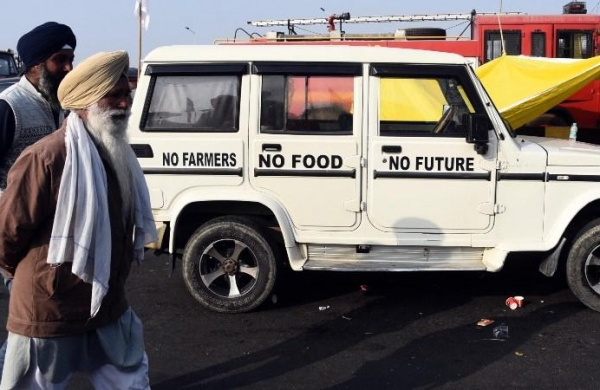 By PTI
NEW DELHI: The Samyukta Kisan Morcha (SKM) on Friday submitted a memorandum to President Ram Nath Kovind urging him to direct the Centre to immediately repeal the three “anti-farmer laws”.

Through its memorandum, the SKM said, it conveyed the “anguish and deep anger” of crores of farming families of the country to the president.

Farmers have been protesting against the Farmers’ Produce Trade and Commerce (Promotion and Facilitation) Act, 2020; Farmers’ (Empowerment and Protection) Agreement on Price Assurance and Farm Services Act, 2020; and the Essential Commodities (Amendment) Act, 2020.

They have been camping at Delhi borders since November last year demanding the withdrawal of these three laws and that a new law be made to guarantee minimum support price (MSP) for their crops.

In its memorandum, the SKM said, “Through this memorandum being submitted to you, we bring to you the anguish and deep anger of crores of farming families of the country. We hope that you will direct the Union government to immediately accept the legitimate demands of the farmers’ movement — repeal the three anti-farmer laws and enact a law that will guarantee remunerative MSP at C2+50 per cent for all farmers.”

“The historical farmers’ movement being led by the Samyukta Kisan Morcha is not only a movement to save farming and farmers of the country but also the democracy of our country.”

The SKM said it hoped that it would get the president’s support as he had taken an oath to save the Constitution of India.

The government has maintained the three agricultural laws are pro-farmer and will usher in new technology in farming.

Several rounds of talks between the farmers and the government have failed to break the deadlock over these contentious laws.

The government last held talks with farmer leaders on January 22.

The talks between the two sides came to a halt after a January 26 tractor parade by farmers in Delhi turned violent.

Farmers camping at Delhi’s Singhu, Tikri and Ghazipur borders will observe ‘Save Agriculture, Save Democracy Day’ on June 26 to mark the completion of seven months of their agitation.