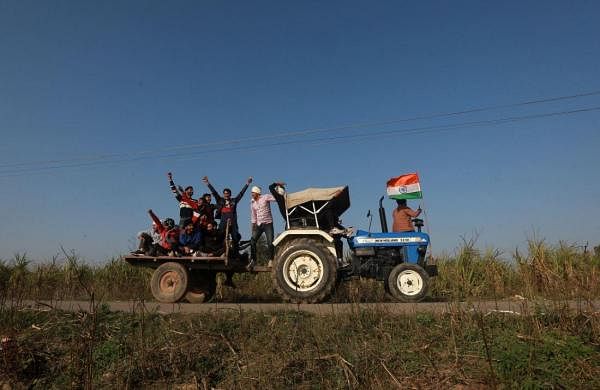 NEW DELHI: To observe one year of the movement against the Centre’s three agri-marketing laws, 500 farmers will participate in a peaceful tractor march to Parliament every day during Winter Session starting November 29, the Samyukta Kisan Morcha said on Tuesday.

Farmers from Punjab, Haryana and Uttar Pradesh have been protesting against the laws, which were stayed by the Supreme Court in January, at the Delhi borders since November 26 last year.

The SKM, an umbrella body of 40 farmer unions leading the stir, announced the tractor march after it held a meeting here.

In a statement, the amalgam said that it will observe one year of the movement on and after November 26 in a “massive way” all over India.

The SKM decided that from November 29 until the end of this Parliament session, 500 selected farmer volunteers will move every day to Parliament in tractor trollies peacefully and with full discipline, to assert their rights to protest in the national capital, the statement said.

This will be done to “‘increase the pressure” on the central government “to force it to concede the demands for which farmers across the country have launched a historic struggle”, it said.

Earlier in March too, farmers had taken out a foot march to Parliament to oppose the contentious three farm laws.

On January 26, a tractor rally had turned violent with protesters breaking barricades, attacking security personnel and storming the Red Fort, where they hoisted a religious flag.

The SKM statement said that on November 26, there will be huge mobilisations from Punjab, Haryana, Uttar Pradesh, Uttarakhand and Rajasthan at all the Delhi borders All farm unions in the SKM will mobilise farmers in strength for this occasion.

Huge public meetings will be held there (at borders) that day. Homage will be paid to more than 650 martyrs in this struggle so far, it said.

The SKM has also called for massive mahapanchayats in state capitals on November 26.

The Winter session of Parliament will begin on November 29 and go on till December 23rd.