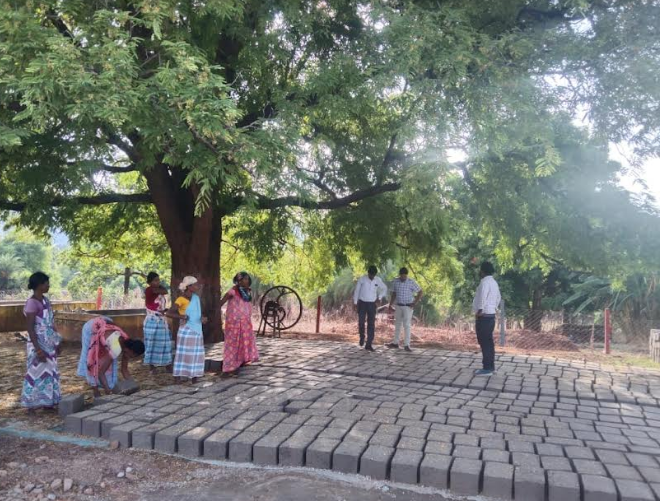 Destiny and strong intentions can also change the destiny. With their strong intentions, the women of Dantewada district wrote a new story by erasing the line of unemployment with their own hands. It is the result of his strength that he took up the task of manufacturing machine-made bricks and successfully completed it. 25 km from Kuakonda, the development block of Dantewada district headquarters. These sisters of Mongra self-help group of beautiful Sameli village surrounded by hills and forests have made 6 thousand bricks till now. does. Under the Godhan Nyay Yojana, which was started on the initiative of the Chief Minister, the construction of Gauthan gave them the way to move forward. Many types of livelihood related activities are being conducted in Gothan of the village, these women are associated with it. Here bricks were being brought from outside for the construction of Gauthan. It is the encouragement of the didis that they took up the work of making bricks and within a month made more than 6 thousand bricks from hand made molds without any machine. Large cement bricks are being manufactured by the National Rural Livelihood Mission. 29 hundred bricks have been sold by the group’s sisters. Which the didis have earned Rs 66 thousand 700 by selling it at the rate of Rs 23 per piece. There is a saving of 12 to 13 rupees in each brick. In which the didis have got a net profit of 37 thousand 700 rupees. Seeing the success of their hard work, the enthusiasm among the sisters of the group has increased further. At present, the order of 6 thousand bricks has been received by the Didis at the rate of Rs.25 per piece. Due to which they will get 90 thousand rupees as net profit. Like this:Like Loading… Continue Reading