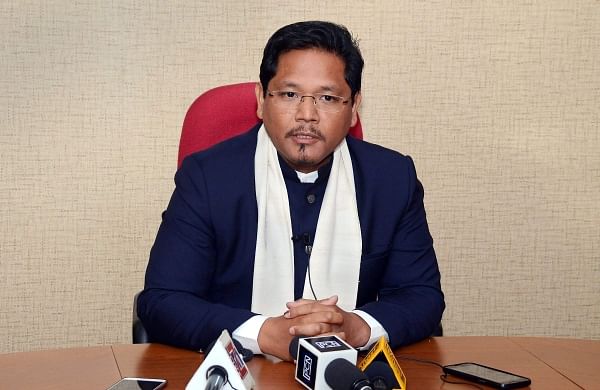 The recent rains for a few days had left the newly-inaugurated interstate bus terminus on the outskirts of state capital Shillong with cracked walls and leaked ceilings much to the embarrassment of the government. As if that was not bad enough, the dome of the under-construction Assembly building collapsed on Sunday.

Earlier, some not-so-old road bridges suffered damages. The series of the incidents ruffled the feathers of not only various organisations but also the BJP, which is a constituent of the government.

The party asked Chief Minister Conrad K Sangma to resign if he cannot order a probe by the Central Bureau of Investigation into the various cases of alleged irregularities.

“However, they made their party (NPP) grow with public money. The CM should agree to a CBI probe or resign from the post bearing moral responsibility,” Marak demanded.

The government hinted at an “independent” probe.

Pillorying the government, Congress leader PN Syiem said projects, worth crores of rupees, were awarded to contractors with dubious distinctions but the “rain gods” exposed the pathetic quality of work.

The Rs 128-crore original project cost of the Assembly building was revised twice to ultimately make it more than Rs 200 crore. Syiem said the project engineer was none other than a prospecting candidate of the NPP which Sangma heads.

The Hynniewtrep Youth Council, a tribal youth organisation, demanded the government order a probe and prosecute everyone responsible, including engineers, contractors, ministers.

Another organisation, Synjuk Ki Nongsynshar Shnong ka Bri U Hynniewtrep, said the shoddy implementation of the projects was defaming Meghalaya outside.