Shinde has 37; Pawar says prove it on floor of House 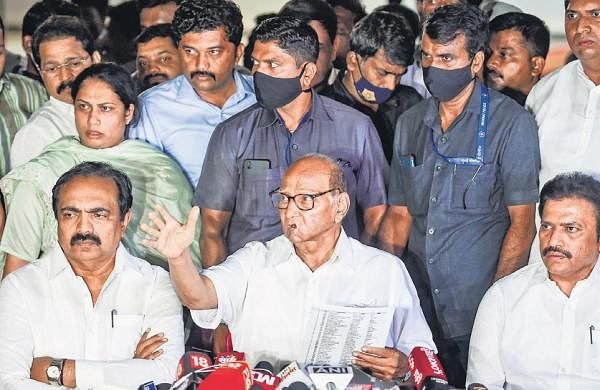 MUMBAI:  With rebel Shiv Sena leader Eknath Shinde showcasing the support of 37 party MLAs in a group photo-op at a Guwahati hotel on Thursday, he appeared to have the numbers to escape the anti-defection law. Also seen in the group photo were nine Independent MLAs.

But NCP chief Sharad Pawar rallied around beleaguered Chief Minister Uddhav Thackeray, saying numerical strength can only be proved in a trust vote on the floor of the Assembly. He blamed the BJP for engineering it, citing Shinde’s claim that it had assured all support.

With the ruling Maha Vikas Aghadi coalition making hectic efforts to draw the rebels back home, Sena leader Sanjay Raut sought to dangle a carrot by claiming the party was prepared to concede their demand to step out the alliance if all of them return within 24 hours and meet Uddhav.

Parallelly, the Sena was said to have asked the Deputy Speaker to take action against those MLAs who did not attend the legislature party meeting. For their part, the rebels said, “we do not want a change in party president; we want the unatural Aghadi alliance to go and a new a government with the BJP for various reasons. (a) We want harassment by central enforcement agencies to stop. (b) NCP is our real political opponent on the ground. Whenever fresh Assembly elections are held, NCP and Congress cannot be expected to transfer votes to Shiv Sena because they have been our traditional foes. However, when BJP was the ally, the transfer of votes was smooth. (c) BJP is a big party, so keeping it in good humour is smart politics.”

But Raut said those afraid of CBI, ED or income tax raids are not hardcore Shiv Sainiks. As for Shinde, his support group appears to be swelling. When he had initially shepharded them to Surat, his MLA count was 20. It went up to 22 by the time he flew out of Surat to Guwahati, where more joined in. On Thursday, four other Sena MLAs entered his camp, taking his score to 37.