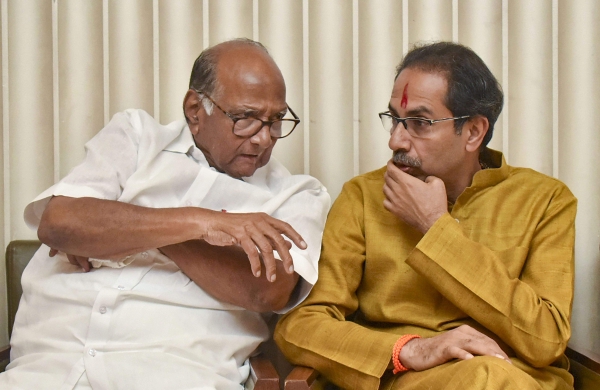 By PTI
MUMBAI: NCP president Sharad Pawar called on Maharashtra Chief Minister Uddhav Thackeray here on Thursday, a meeting coming days ahead of the beginning of the monsoon session of Parliament and in the backdrop of controversial remarks made by state Congress head Nana Patole.

The meeting took place at ‘Varsha’, the CM’s official residence in south Mumbai.

Pawar is a Rajya Sabha member and his party is a key constituent of the Maha Vikas Aghadi (MVA), which is led by Thackeray’s Shiv Sena.

The Congress is the third ally in the MVA.

The monsoon session of Parliament will commence from July 19 and continue till August 13.

The state government has demanded that the Centre intervene and take steps to relax the 50 per cent limit for reservations to restore political quota for OBCs in local bodies and in jobs and education for the Marathas.

The government has also sought three crore anti-COVID-19 vaccines from the Centre every month to accelerate the inoculation drive in Maharashtra.

Patole recently kicked up a row when he sought to suggest that the MVA government was keeping an eye over his movements and claimed the Shiv Sena and the NCP feel the ground was slipping from beneath their feet due to his party’s growing influence.

As his “under watch” remarks caused a flutter, Patole later claimed wrong information was being spread through the media and asserted there was no dispute among MVA allies.

Talking to reporters on Wednesday, the Congress leader, in a veiled attack on the NCP in the context of the 2014 assembly elections, said his party was “cheated” seven years ago and it is now preparing for the 2024 general elections keeping that in mind.

He has said the Congress will contest elections on its own and emerge as the single largest party in the state.