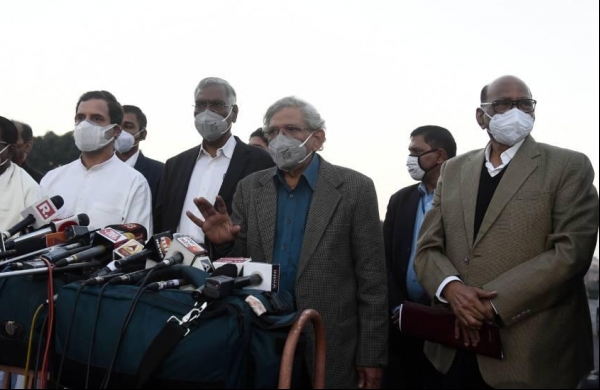 By Express News Service
NEW DELHI: Opposition leaders on Monday discussed the farmers’ agitation and are expected to meet to devise a joint strategy to corner the government on the issue during the upcoming Budget session of Parliament.

NCP president Sharad Pawar met CPI (M) general secretary Sitaram Yechury and CPI general secretary D Raja at his residence in the national capital. The meeting comes a day before the SC is to give an order on a case related to the three farm laws and indicated that it may stay the implementation of the contentious Acts, refusing to grant more time to the Centre to explore the possibility of an amicable solution.

The leaders discussed the order and that they stand by farmers’ demand for the repeal of the laws. Ahead of its countrywide agitation on January 15 in support of agitating farmers, Congress chief Sonia Gandhi also reached out to the Opposition leaders and is likely to reach out to other like-minded parties to plan out a joint strategy to press the demand for the rollback of the legislations. The leaders are expected to meet ahead of the Budget session, starting January-end.

On Saturday, the Congress had announced that it has decided to organise ‘Kisan Adhikar Divas’ across the country on January 15 and hold protests outside the Raj Bhavans.

“Now, the Supreme Court has said that the Centre failed to protect the interests of the farmers, let us hope good sense prevails with the government. The government should repeal the laws and the PM should speak to the farmers and offer his apologies,” said Congress general secretary, organisation, KC Venugopal.