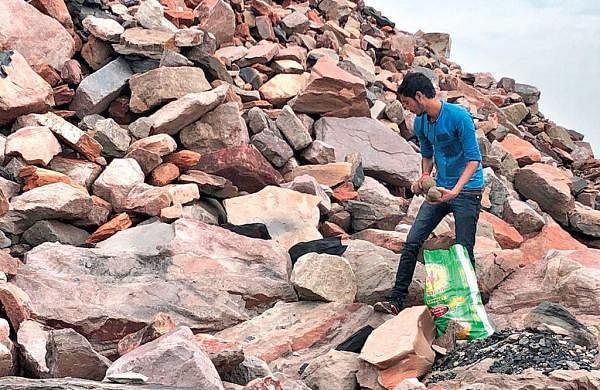 RANCHI:  Seed balls are turning out to be a cheap and effective tool for Bharat Coking Coal Limited to reclaim overburden dumps which otherwise remain unusable and neglected.  Under a mine reclamation project, thousands of seed balls — made of a mixture of grass seeds, clay and compost — are used to spread greenery at overburden dumps in Dhanbad. Overburden is the waste or spoil, which lie above coal or minerals in mining areas.

According to BCCL officials, seed balls are thrown on the slopes of OB dumps before the monsoon. With the onset of rains, the seeds germinate in due course of time and help in binding the dumps. BCCL officials claimed that this ‘throw and grow method’ is an effective, sustainable and useful conservation tool for establishing vegetation.

“As the dump is mostly rocky surface where it is difficult to plant anything, workers ensure the seed balls are of adequate size. Before the onset of monsoon, they are thrown in the OB dumps which later have pools of water enabling the seeds to germinate,” said BCCL Environment Head of the Department (HOD) Kumar Ranjeev. Only shrub and grass seeds are put in the speedballs at the places where mining is to be done in future, he added. “We have procured 1,870 kg of grass seeds from Rajasthan Grass Research Institute (for the purpose).”

The objective, according to Kumar, is to increase grass cover which attracts birds and insects further developing the ecological system. “Initially, clay, compost and seeds were mixed in equal quantity but it was found not to be effective. The quantity of compost and clay was increased, limiting the proportion of seed to 10 per cent. It gave good results as the seeds got a chance to germinate in a better way,” Kumar said. As many as 25 kg of grass seeds are spread in one hectare for three years — 10 kg in first year, 8 kg in the second and 7 kg in the final year, he added.