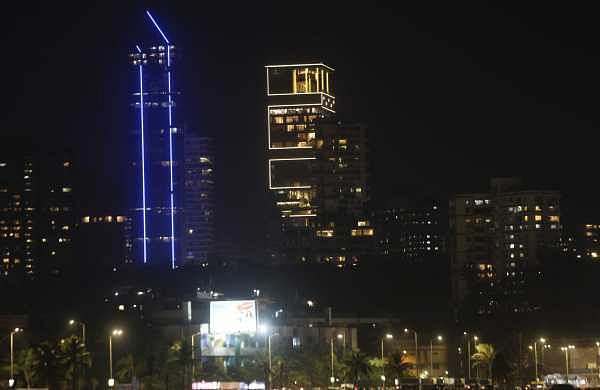 MUMBAI:  The security cover of Antilia on Monday was bolstered further after a taxi driver alerted the police about two people inquiring about the residence of India’s richest tycoon Mukesh Ambani.

Ambani and his family have been living at Antilia in south Mumbai’s posh Cumballa Hill area since 2012.

“We received a call from the taxi driver that two people driving a car and carrying a bag asked for Mukesh Ambani’s residence Antilia. We are recording his statement,” the Mumbai Police said.

“A DCP-level rank officer is monitoring the situation. Security was heightened outside Antilia and CCTV footage is also being checked.”

The men stopped their four-wheeler, a hatchback, near Killa court in CST and sought directions of the landmark, the driver told the police.

The driver was clueless about the direction in which the car went ahead after its occupants spoke to him, according to the police.

As a pre-emptive measure, more barricades were being put by the police outside the 27-storey building located on Altamount Road.

The police were yet to register a case till the report was filed in late evening.

In February, Antilia was in the news after police found an explosives-laden sport utility vehicle was found parked outside the high-rise. Gelatin sticks and a threatening note were seized from the vehicle.

The security scare also comes days after Reliance Industries Ltd clarified Ambani has no plans to relocate or reside in London or anywhere else in the world.

The Indian multinational conglomerate had also sought to end speculation over India’s richest family dividing time between the UK and Mumbai, after a report that the Ambanis were looking to make the 300-acre country club in Buckinghamshire, Stoke Park their primary residence.