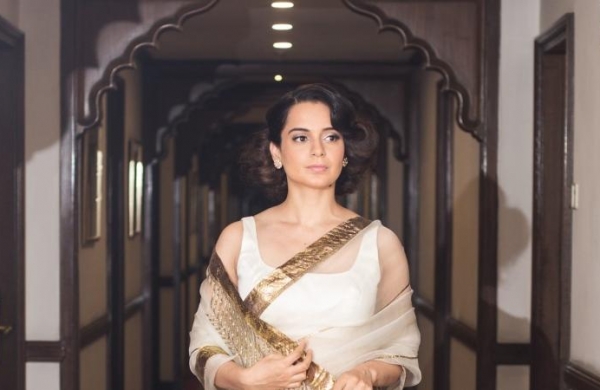 By Express News Service
BHOPAL: Security has been beefed up in Sarani town of Madhya Pradesh’s Betul district following opposition Congress’s announcement to hold massive protest against national award winning actress Kangana Ranaut on Friday after she termed agitating farmers as “terrorists” in her tweet.

Kangana is presently shooting for her next Bollywood flick Dhaakad within the coal handling plant premises of the Satpura Thermal Power Station in Sarani, around 45 km from Betul district headquarters.

The opposition Congress had earlier given the Bollywood actress an ultimatum till Friday to apologize for terming the agitating farmers as “terrorists,” failing which they had threatened to carry out a massive tractor rally from different parts of Betul district to Sarani town in a bid to stall the shooting of Kangana Ranaut and Arjun Rampal starrer movie on Saturday.

Earlier, on Wednesday, a Congress delegation led by the Betul District Seva Dal chief Manoj Arya had in Chicholi tehsil of Betul district, submitted to the local tehsildar, a memorandum addressed to the Betul district collector.

Reacting to opposition Congress workers’ ultimatum and threats to the actor, MP home minister Narottam Mishra said on Thursday, “I request MP Congress president Kamal Nath to stop his party workers from indulging in such activities. I’ve already talked to the Betul district police superintendent and asked her to ensure that Congress workers aren’t allowed to disturb law and order in the district. I’m also trying to get in touch with our sister-daughter Kangana over the phone, we’ll ensure her full security and safety.”

Just a few hours after the MP home minister’s statements in Bhopal, the Congress party decided to prepone their Saturday’s protests in Betul by a day.

“We’ll hold the protest in Sarani town, where the shooting of the Kangana Ranaut-starrer movie is underway. We’re determined to hold protests in Sarani on Friday evening, we’ll do what we’ve announced, let the local administration and police do what it has to,” Betul District Congress president Sunil Sharma said on Thursday evening.

A Congress delegation, earlier on Thursday, also submitted a memorandum to the Betul district police superintendent, demanding registering an FIR against Kangana Ranaut for her tweet in which she had termed the agitating farmers as “terrorists.”

Last week, the Bollywood actress had attacked the Barbadian pop singer Rihanna for extending support to the ongoing farmers’ agitation. While responding to Rihanna’s tweet, Kangana had tweeted dubbing the protesting farmers as “terrorists.”