Second installment will come to farmers’ account on August 20, registration of paddy purchase from 17 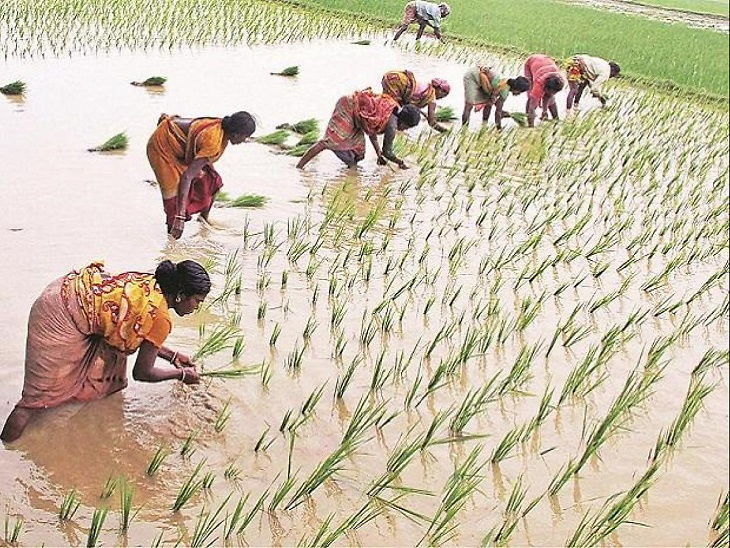 The remaining two installments of the Rajiv Gandhi Kisan Nyaya Yojana in Chhattisgarh will be paid in the coming time. The first installment has been paid on 21 May while the second installment will be paid on 20 August. At the same time, the decision to purchase paddy to be made in 2020-21 and the amount of difference will be decided in the cabinet. Earlier on Thursday morning, the government faced an uncomfortable situation regarding the statement made by Food Minister Amarjeet Bhagat in this regard. His statement was attacked by the BJP. In response, Minister Bhagat himself had to come forward in the evening. He was accompanied by Mohammad Akbar, the spokesman of the government. In a discussion with reporters, Food Minister Bhagat said that the cabinet will take a decision regarding the amount of difference of the upcoming kharif crops. Two separate subcommittees have been formed for Paddy Purchase and Rajiv Gandhi Kisan Nyaya Yojana. Bhagat said that the cabinet on the recommendation of the subcommittee headed by Agriculture Minister Ravindra Chaubey for the purchase of paddy for the coming year Will take the final decision. He informed that the government has completed preparations for this season. Registration for selling paddy will be done from August 17 to October 31 and the work of arrest will be done from August 1 to September 20. A meeting of the Cabinet Subcommittee on Kisan Nyay Yojana was held recently in which it was decided to send a letter to the Jute Commissioner for the purchase of gunny bags and issue 1500 crore on 20 August.

Registered farmers do not need registration: Akbar
Forest Minister Mohammad Akbar said that the target of purchasing 85 lakh metric tonnes of paddy has been set this year. In the last kharif season, 19 lakh 55 thousand farmers had registered. Not all farmers sell paddy. In the previous season, 16 lakh 90 thousand farmers sold their paddy compared to the registered farmers. Akbar said that all the farmers of the last kharif season registered in Bhuiyan do not have to register separately. The decision to give the difference amount of the previous season, the installment of the same is still being given. According to what is currently going on, Minister Bhagat has said to give Rs 10,000 per acre.

Farmer’s data bank will be ready, government will ask for Aadhaar and mobile number at the time of Girdawari
The state government will create a data bank of farmers. For this, Aadhaar and mobile numbers will be taken from farmers. Farmers registered last year will also be considered eligible for purchase of paddy and maize this year. There will be no need to come to the committee to register these farmers. However, if any registered farmers want to get amended already, then it can be done through limited modules. The data of the registered farmers will be updated from August 17 to October 31. The registered land and paddy and maize acreage and measles of registered farmers will be updated with the help of Revenue Department. Please tell that the work of farmer registration is done according to the revenue document, so the revenue department will make the data available for registration after completing the work of Girdawari. Aadhar and mobile numbers will also be taken from all farmers at Girdawari. Food Civil Supplies and Consumer Protection Department has appointed all the divisional commissioners, collectors, Registered Cooperative Societies and Managing Director Nava Raipur sent a letter in this regard. In this, it has been asked to provide the list of the registered land of farmers registered in Kharif 2019-20 and the information on paddy acreage and measles to the Patwari of the concerned area.
One and half month for new registration: For Kharif 2020-21, new farmers will
be registered between August 17 and October 31 . For new registration, farmers will have to apply to the Tehsil office along with the relevant documents.

Make in-charge secretary in one month Girdawari
Chief Secretary RP Mandal has asked the in-charge secretaries of districts to complete the work of flawless Girdawari within a month. He purchased paddy and maize on the support price to the farmers and the farmers are benefited on the basis of the Kisan Nyaya Yojana. For this, verification of the actual cultivators, their rightful acreage and the crops involved in it is necessary. There are many areas in different districts of the state, where crops other than paddy are produced in a large area. Sugarcane crops have been included in paddy, maize, soybean, groundnut, sesame, arhar, mung, urad, kulathi, ramatil, kodo, kutki, ragi and rabi for the kharif season under the justice scheme.