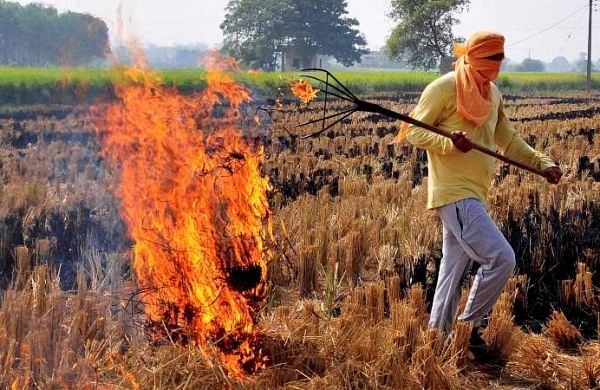 By PTI
NEW DELHI: The ongoing ‘Kisan Sansad’ organised by the agitating farmer unions on Monday demanded the scrapping of sections in a bill on checking air pollution that penalise farmers for stubble burning, according to the Samyukt Kisan Morcha (SKM).

In a statement, the SKM, which is an amalgam of 40 farmer unions that have been agitating against the three central agri laws, expressed concern over the ‘Commission on Air Quality Management in NCR and Adjoining Areas’ Bill 2021; that was introduced in the Lok Sabha earlier during this monsoon session,.

The SKM said that the new bill has an additional section that allowed the farmers to be penalised for stubble burning in the name of environmental compensation.

The Kisan Sansad or mock Parliament of farmers demanded that the penal provisions on farmers in the bill be dropped.

“While in the new Bill, a caveat has been added in the penalties provision (Section 14) that farmers will be exempted from the provision of penalties of up to Rs 1 crore and five years of jail term, a new penal provision on farmers has been deviously included as Section 15, in the name of “Environmental Compensation’,” the SKM claimed.

The farmers’ body said that the government needed to provide alternatives to farmers to tackle the problem of stubble farming, instead of penalising them.

“There is no economically viable solution put in place to deal with paddy straw with the genesis of the problem in wrong technologies and policies being promoted.

“Kisan parliamentarians suggested that there are solutions to tackle the straw burning problem through legally-guaranteed MSP for all crops, through practices like mulching and composting, through low-cost appropriate machinery, etc, which is not being done,” the SKM said.

The ‘Kisan Sansad’ is being organised by protesting unions to draw attention to the farmers’ issues while the Monsoon session of Parliament is underway.

The farmers have expressed fear that the central agri laws could lead to elimination of the minimum support price system and leave them at the mercy of big corporations.

The government has maintained that the MSP and the Mandi system will stay.

Over 10 rounds of talks with the government that has been projecting the laws as major agricultural reforms have failed to break the deadlock between the two parties.

The SKM also announced that the Kisan Sansad will see talks by eminent economists and other experts in the upcoming days to “enrich the proceedings”.

“The Kisan Sansad will discuss matters related to MSP legal guarantee over the next two days, on August 4-5 “The Kisan parliamentarians will be joined by experts like Devinder Sharma, Sucha Singh Gill, R S Ghuman and others,” the statement said.