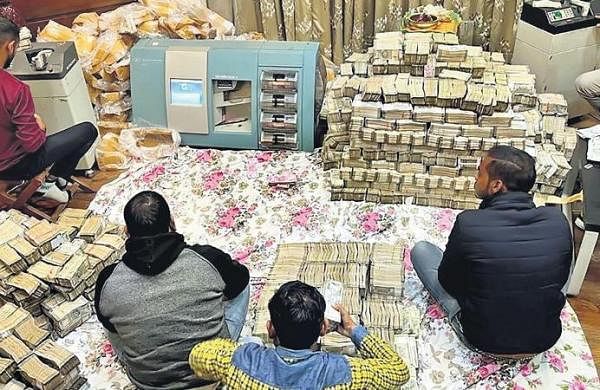 LUCKNOW: Wads of currency worth Rs 150 crore were confiscated so far during Income Tax raids at the premises of Kanpur businessman Piyush Jain on Friday.

The I-T raids, which commenced on Thursday, are still underway at various premises including the house, office, factory, cold store, and petrol pump of Jain in Kanpur, Kannauj, Mumbai, and Gujarat.

The raids were initially conducted by GST officials on the charge of tax evasion but later drew in I-T sleuths also as more details about the unaccounted wealth amassed by the trader started surfacing.

Jain, a perfume trader and the manufacturer of pan masala, is believed to be close to Samajwadi Party chief Akhilesh Yadav. Jain had manufactured a perfume launched by Akhilesh a couple of months back.

Visuals of Jain’s wealth and the raids underway showed note-counting machines scattered on the floor, surrounded by wads of cash bundled in plastic and tape.

Piyush Jain, basically belongs to Chhipatti in Kannauj where he has a residence, a perfume factory, cold store and a petrol pump.

UP BJP spokesperson Rakesh Tripathi accused the SP of allegedly getting “help from corrupt people and goons”.

But, SP leader Anurag Bhadouria tweeted that Jain was affiliated to the BJP and that the SP had nothing to do with this friend of the BJP, nor his perfume.