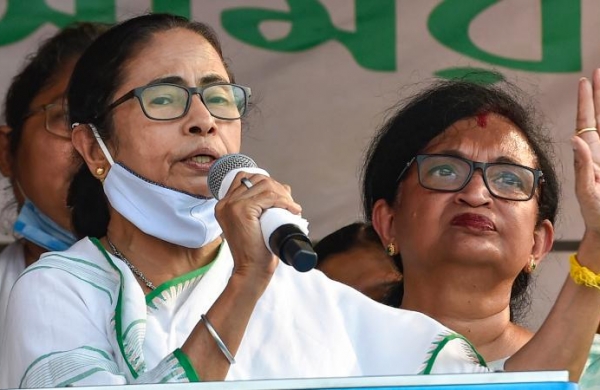 By PTI
NEW DELHI: The Supreme Court Friday stayed the operation of a Calcutta High Court order which resulted in the reinstitution of several criminal cases against West Bengal Chief Minister Mamata Banerjee’s election agent in connection with the Nandigram protests against land acquisition by the state government from 2007-09.

A bench of Justices Indira Banerjee and Krishna Murari said, “Since the order which affects the petitioner (election agent) herein was passed without hearing him, we deem it appropriate to pass an interim order staying the operation of the order dated March 5, 2021”.

The petitioner, S K Supian, has challenged the order passed by the Calcutta High Court on two PILs against the withdrawal of prosecution in various criminal cases connected with the protests over the alleged improper acquisition of land by the state to create a special economic zone (SEZ) in Nandigram.

Supian, represented by senior advocate Vikas Singh, has contended he was not made a party in the PILs and the reinstitution of the criminal cases has impaired his ability to discharge his functions as an election agent under the Representation of People Act 1951.

Singh alleged that a PIL was “filed by a BJP person” in the high court which passed the interim order.

“By an interim order, the case was revived,” he said, adding, “I (petitioner) am the election agent of the Chief Minister and because of this order, I am virtually disabled”.

“It is unheard of. There is no question of revival of case,” Singh said, adding that his client was impleaded as a party in the matter before the high court, but after passing an interim order without hearing him.

He said the cases relate to protests at Nandigram and later, the state government decided to withdraw these matters.

Singhvi sought stay of the high court interim order and said it was passed on a PIL and that too, without hearing the person.

“You must stay the order (of high court) completely,” Singhvi said.

Senior advocate Mukul Rohatgi, appearing for a caveator, said both the petitions — one filed by the state and the other by Supian — should be dismissed with exemplary cost as they have “lied to this court”.

The caveator before the apex court is one of the persons who filed the PIL in the high court.

Rohatgi, during the hearing, claimed that both the state and Supian have argued that only agitation cases were withdrawn but there were some cases, including those under section 302 (murder) of the Indian Penal Code also.

However, the bench said that the plea filed by the state is not before it.

Singh said in Nandigram protest, there were allegations that some people had died in police firing and in some cases, allegation of murder was there.

Rohatgi alleged that there are six cases against Supian and he was absconding for 13 years.

“This is a shocking case where cases are withdrawn in stereotype fashion,” Rohatgi said, adding the petitioners before the high court are practicing lawyers.

Rohatgi said the apex court can ask the division bench of the high court to hear the matter on Tuesday.

Supian, in his plea, has claimed that he was discharged or acquitted in various cases, in relation to the protests against the land acquisition, in February and June last year.

The criminal cases had alleged that he had engaged in unlawful assembly and had participated in the violence in connection with the protests, his petition has said.

He has claimed that he came to know the cases were reinstituted when the process to issue arrest warrants was initiated by the magisterial court on March 15.

The magisterial court by its order of March 15 had also stayed its order of last year permitting withdrawal of the prosecution and reinstated the criminal cases.

The matter was mentioned in the first half of the day before a bench headed by Chief Justice S A Bobde by senior advocate Vikas Singh.

The apex court, during the mentioning, said that “anything can happen in a political rivalry” and that it will see whether a special bench can be constituted depending on availability.

Later, the matter was listed for hearing in the post-lunch session.