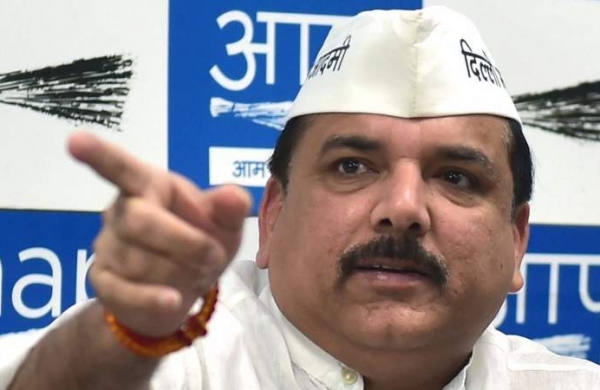 By Express News Service
NEW DELHI:  The Supreme Court on Tuesday refused to stay the non-bailable warrant (NBW) issued against Aam Aadmi Party (AAP) Rajya Sabha MP Sanjay Singh in connection with hate speech cases.​Singh had approached the top court seeking quashing of multiple FIRs lodged against him in various districts of Uttar Pradesh following his press conference last year in August, where he claimed that people of the state feel a specific caste is running the government.

Singh has also challenged the January 21 order of the Allahabad High Court that refused to quash the FIR in Lucknow.

A bench headed by Justice Ashok Bhushan said it would not pass any order without going through the high court verdict and said the AAP leader could seek exemption from appearance before the trial court and slated the hearing for next week.

Singh alleged that multiple FIRs were registered against him at the instance of BJP’s members at various police stations in different districts of the state.

“The said FIRs have been filed against the petitioner out of the malice and sheer political vendetta with intent to coerce, harass and intimidate the petitioner as a part of a larger ploy to muzzle the opposition leaders, from speaking up against the government of Uttar Pradesh,” the plea stated.

The MP has also alleged that the sole aim of the state machinery was to prevent him from campaigning in Uttar Pradesh in the run-up to the Assembly elections scheduled to be held in 2022.