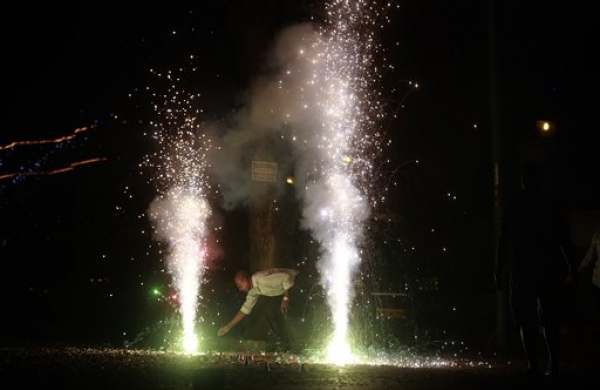 By PTI
NEW DELHI: The Supreme Court Friday refused to interfere with an order of NGT imposing a total ban on the sale and use of firecrackers during COVID-19 pandemic in areas where the ambient air quality falls under the “poor” and above category.

A bench comprising Justices A M Khanwilkar and and Sanjiv Khanna observed that scientific studies are not needed to ascertain the side-effects of firecrackers on health of citizens.

The observation came after the advocate appearing for a seller of firecrackers referred to a report of IIT Kanpur stating that firecracker is not even in the list of top 15 factors which contributes to air pollution.

Responding to the submission, the bench said, “Do you need IIT report to understand that fire crackers impact your health? You just ask anyone staying in Delhi what happens during Diwali.”

Senior advocate P S Narasimha, appearing for firecracker sellers, told the top court that a total ban has been imposed on firecrackers during COVID.

The bench, however, clarified that the ban is in place only in places where air quality is poor and the NGT ban is only on sales and not on manufacture.

“Ban is only dependent on air category. If its severe it will not be allowed. Ban is only where quality is poor. When the air quality is moderate green crackers are allowed. In other areas it is allowed,” the top court said.

The NGT on December 2, 2020 had directed that there would be a total ban on the sale and use of all kinds of firecrackers during COVID-19 pandemic in the NCR and all cities/towns in the country where the ambient air quality falls under the “poor” and above category.

The green panel had said its direction to restrict the use of firecrackers in cities/towns where air quality is ”moderate” or below to green crackers and for the duration of not more than two hours will continue.

It had directed all District Magistrates to ensure that banned firecrackers are not sold and asked them to recover compensation from violators.