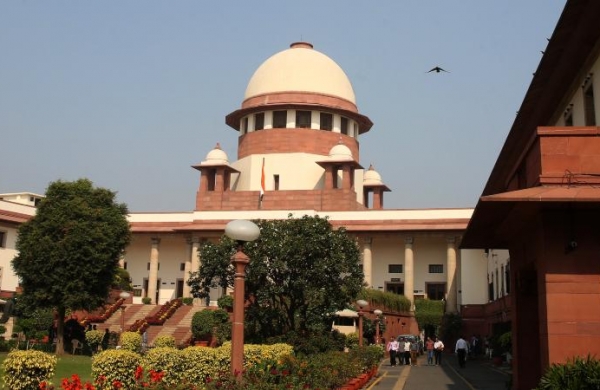 By PTI
NEW DELHI:  The Supreme Court Tuesday sought government’s reply on a plea, seeking transfer of cases from several high courts to it against the Centre’s notification to declare five communities  Muslims, Christians, Sikhs, Buddhists and Parsees as minorities even in those states and UTs where they are in majority.

A bench comprising Chief Justice S A Bobde and Justices A S Bopanna and V Ramasubramanian issued notices to Ministry of Home Affairs, Ministry of Law and Justice and Ministry of Minority Affairs.

The high courts at Delhi, Meghalaya and Guwahati are seized of the petitions challenging the Constitutional validity of section 2(c) of the National Commission for Minorities Act, 1992, under which the notification was issued on October 23, 1993.

The notification had declared the five communities as minorities across the country, leading to a situation where majority population of Sikhs in Punjab and Muslims in Jammu and Kashmir are availing of the benefits meant for minorities, the transfer petition alleged.

The apex court was hearing a plea filed by lawyer and BJP leader Ashwini Upadhyay seeking transfer of all cases from high courts to the apex court for an authoritative pronouncement on the issue.

The petition, filed through advocate Ashwani Kumar Dubey, said that in order to avoid multiplicity of litigations and conflicting views, the transfer plea has been moved before the apex court.

Arbitrary and irrational disbursement of minority benefits to majority infringes upon the fundamental right to the prohibition of discrimination on the grounds of religion, race, caste, sex or place of birth, the plea said.

The petition said the Hindus, who are a majority community according to national data, are a minority in several north-eastern states besides Punjab and Jammu and Kashmir.

However, the Hindu community is deprived of the benefits that are available to the minority communities in these states, the plea said, adding that the National Commission for Minorities (NCM) should reconsider the definition of minority in this context.

The plea has sought to declare section 2(c) of the NCM Act 1992 void and inoperative for being arbitrary, unreasonable and offending.

The definition of minority, according to Article 29-30 of the Constitution, has left leakages in the hands of the State, which shall be misused and are being misused for political benefits, the petition said, adding that the minority status be granted to Hindus in states where the number of the community members has decreased.

The plea has sought the minority status for Hindus in six states and two Union territories, where the number of the community members has fallen according to Census 2011.

Their minority rights are being siphoned off illegally and arbitrarily to the majority population because neither the Centre nor the state governments have notified Hindus as a ”minority” under the National Commission for Minorities Act.

Therefore, Hindus are being deprived of their basic rights, the plea has said.

It has pointed out that Christians are in majority in Mizoram, Meghalaya and Nagaland and there is a significant Christian population in Arunachal Pradesh, Goa, Kerala, Manipur, Tamil Nadu and West Bengal, but they are treated as a minority community.

Likewise, Sikhs are in majority in Punjab and there is a significant Sikh population in Delhi, Chandigarh and Haryana, but they are treated as a minority community, it said.

However, they are enjoying the minority status and communities, which are real minorities, are not getting their legitimate share, jeopardising their basic rights guaranteed under Articles 14, 15, 19 and 21 of the Constitution, the petition has said.