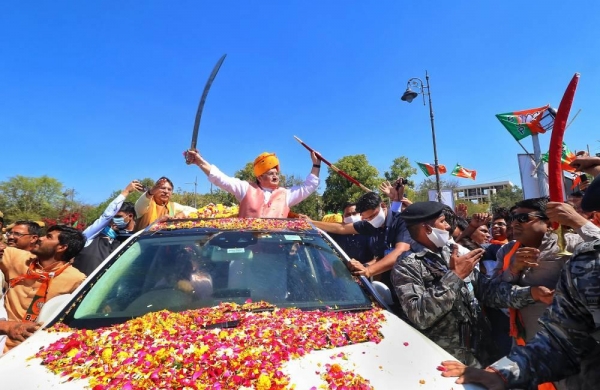 Addressing a meeting of the state executive at the Birla auditorium, he stressed the need for unity as he tried to motivate leaders and workers ahead of the four assembly by-elections.

Infighting in Rajasthan BJP has grown uglier of late, with state chief Satish Poonia and former CM Vasundhara Raje at loggerheads. Raje supporters claim the party has sidelined her and are openly demanding that she should be the CM face in the 2023 Assembly polls.

The divide was visible when state leaders went to the airport to receive Nadda. Raje and Poonia supporters stood in different corners.

Though Nadda did not name any leader, he dropped enough hints and asked all sections to project a united face of the party. He advised party leaders that any ‘Ekla Chalo Re’ policy by any leader will not work.

“A person becomes a leader only through his actions and by taking everyone together,” said Nadda. He said that many leaders have given up self-analysing.

“Knowingly or unknowingly, we assume that we know everything. This is the beginning of stagnation. The truth is our productivity decreases,” he said.

“I request everyone here to do self-analysis. What is your commitment, your relevance? Politics is a place where you have to relevant.”

“Relevance means how much are you contributing to the party. How much are you acceptable. As a leader, you will have to develop the quality of taking along everyone which will increase your acceptance,” he said in a candid address.

“This has harmed us and I believe everyone should focus on self-analysis to make the party stronger.”

The meeting was attended by the party’s central office-bearers from Rajasthan and functionaries of the state unit.

Nadda’s visit assumes significance as it came ahead of Raje’s planned ‘dharmik yatra’ next week, seen as an attempt to re-assert her influence in the state unit after maintaining a low profile since the BJP’s defeat in 2018 assembly polls.

Raje and her loyalists are planning a show of strength on March 8 on her birthday.

The party, which will soon be facing bypolls in four assembly seats, has distanced itself from Raje’s ‘yatra’, saying it was a “personal matter”.

In signs of growing factionalism in the party, Raje’s supporters have raised the demand to declare her as the CM candidate for the next elections.

A 20-odd MLAs recently expressed resentment against the state leadership for allegedly not being allowed to raise public interest issues in the assembly.

“Are we working with maturity? There should be self-analysis,” Nadda said at the meeting while stressing that the leaders should keep on striving to enhance their relevance, acceptance and maturity.

He said that one becomes a leader by actions.

“Leadership is developed when you take everyone along,” Nadda said, adding “the BJP is a cadre-based party and it is our responsibility to strengthen that cadre.”

Speaking on the agitation against the agri laws, the BJP national president alleged that farmer leaders have “only done politics” and said it is Prime Minister Narendra Modi who took steps for the welfare of the farmers.

He claimed that the reforms initiated by the central government will change the fortune of the farmers.

Nadda also targeted Congress for changing its stand on the issue.

“Did they not promise to abolish APMC in their manifesto?” he asked. He directed the party leaders to strengthen the organisation at the grassroots level.

Expressing confidence that the BJP will return to power in Rajsthan, he directed the party unit to strengthen Mandals by April 15, complete the formation of booth level committees by September 25 and activate ‘Panna Pramukhs’ by December 25.

The assembly elections are due in Rajasthan in 2023.

Praising Prime Minister Modi for the handling of the COVID pandemic, the BJP chief said that he saved the country by timely imposing lockdown and encouraged scientists in India to develop vaccines which resulted in the world’s largest vaccination programme.

He also spoke about the central government introducing the world’s largest healthcare programme through the Ayushman Bharat scheme.

Targeting the Ashok Gehlot-led Congress government in Rajasthan, he alleged that its priority is not to deliver good governance.

He also targeted the state government on the issue of crimes against women and atrocities against Dalits.

Addressing the meeting, the BJP’s state president Satish Poonia said the party will hold demonstrations across the state against the Congress government from 6 to 14 March.

Earlier, Nadda, who arrived at Jaipur airport from Delhi, was given a grand welcome by the party workers at several locations from the airport to the Birla auditorium meeting venue.