Satellite images, path and map of the cyclonic storm 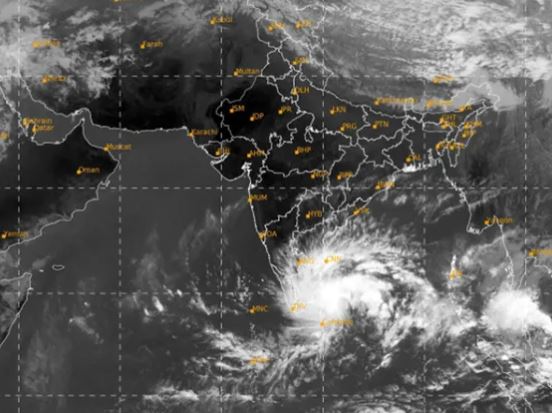 amil Nadu is bracing for the impact of another cyclone as Cyclonic Storm Burevi is all set to cross the southern coast of the state between Kanniyakumari and Pamban during the night of December 3 (Thursday) and the early morning of December 4 (Friday).

When Cyclone Burevi makes landfall on the coast of Tamil Nadu, it is likely to carry winds with a speed of 70-80 kmph gusting to 90 kmph.

The India Meteorological Department (IMD) on Wednesday said in a bulletin that the impact of the cyclonic storm on coastal districts in south Tamil Nadu is very likely to be seen from Thursday forenoon – initially from Ramanathapuram district and then gradually from Kanniyakumari district.

“The Cyclonic Storm ‘Burevi’ over southwest Bay of Bengal moved west-northwestwards with a speed of 18 kmph during past six hours and lay centered at 0830 hrs IST of today, the 02nd December 2020 over southwest Bay of Bengal, about 200 km east of Trincomalee (Sri Lanka), 420 km east-southeast of Pamban (India) and 600 km nearly east-northeast of Kanniyakumari (India).

The weather department said the cyclonic storm with wind speed of 70-80 kmph, gusting to 90 kmph, would be centred very close to Pamban around the noon of December 3 or Thursday.

The IMD has issued a red warning for tomorrow for south Tamil Nadu and south Kerala, where heavy to very heavy rainfall is expected at most places. Further, extremely heavy rainfall is also likely over some places in these areas on the same date.