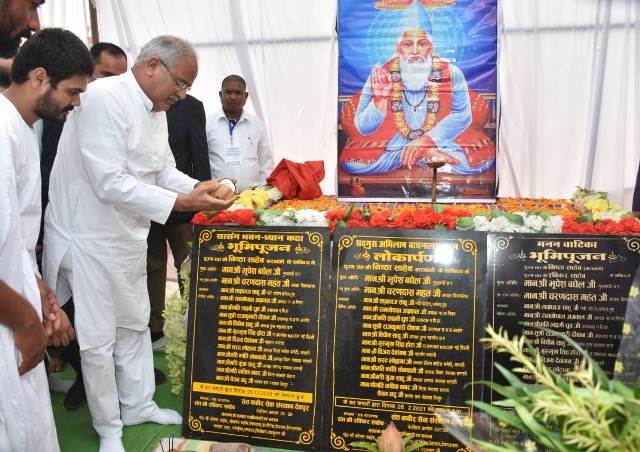 Chief Minister Shri Bhupesh Baghel has said that the excellent thoughts of Sant Kabir have had a deep impact in Chhattisgarh, hundreds of examples of which are present in the society. The light of the knowledge of Saint Kabir is illuminating the human society even today. He was not only a saint, a poet and an intense social reformer, but he went beyond that and taught people the way of life. Mr. Baghel was addressing the Parakh Kabir Satsang Mela and Yuvodaya program organized at Dongeshwar Dham (Dongapathra) Devpur in Dhamtari development block today. Also launched. Along with the announcement of beautification of the fair area, he also announced to sanction Rs 20 lakh for the development of Sant Kabir Ashram and on the request of the District Panchayat President, to sanction Rs 10 lakh to Satnami Samaj for the construction of Jaitkham. The Chief Minister said that Sant Kabir took a strong dig at social evils, superstition and told us that there is only truth after God. Even after the passage of six and a half hundred years, research is being done on the great social reformer and saint Kabir. He said that many steps have been taken by the State Government to strengthen the rural economy. Paddy is being procured on support price in order to provide fair price to the farmers for their produce. In Gauthans, women self-help groups are being provided employment in large numbers in the preparation of vermi compost. He told that now the courtyards of the house are coated with cow dung, now the walls will also be painted with it. Regarding prohibition of drugs, the Chief Minister said that it is a social evil and to remove it, the entire society will have to come forward with determination. In the program, Sant Nishtha Saheb, who came from Barabanki Uttar Pradesh and Ravikar Saheb, head of Devpur Kabir Satsang Seva Sansthan, briefly threw light on the purpose of Kabirpanth. Earlier, the Chief Minister visited Dongeshwar Dham and wished for the prosperity and progress of the people of the state. On this occasion, Chairman of Chhattisgarh State Civil Supplies Corporation, Mr. Ram Gopal Agarwal, Chairman of Chhattisgarh Mineral Development Corporation Mr. Girish Devangan, President of State Milk Federation Mr. Vipin Sahu. , Sihawa MLA Dr. Laxmi Dhruva, Municipal Corporation Mayor Mr. Vijay Devangan, District Panchayat President Mrs. Kanti Sonwani, Vice President Mr. Nishu Chandrakar, former MLA Dhamtari Mr. Gurmukh Singh Hora, former Kurud MLA Mr. Lekhram Sahu along with officers of district and police administration Local public representatives and followers associated with Kabirpanth were present in large numbers. Like this:Like Loading… Continue Reading