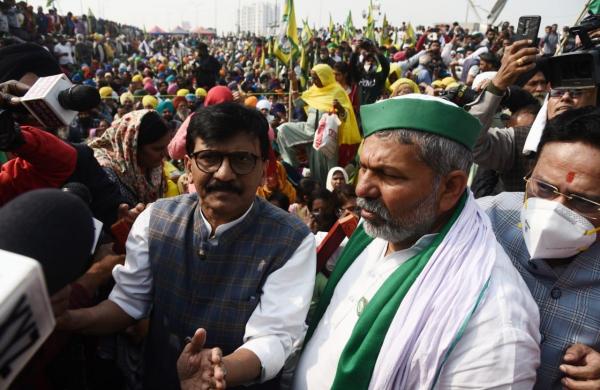 The Maharashtra leader arrived at Ghazipur when security has been further tightened at the farmers’ protest site.

Raut, one of the handful people wearing a face mask, met Tikait and other protestors off the stage after reaching here around 1 pm.

The way vandalism unfolded here after January 26 and an attempt made to suppress the movement and Tikait, we felt it is our responsibility to stand by the farmers’ and extend support of the whole of Maharashtra, Shiv Sena and Uddhav Thackeray saahab, Raut told reporters.

Tikait said, The farmers’ protest is apolitical and no politician has been given the mic or space on the stage.

 A major Hindutva ally of the BJP-led NDA till 2019, Shiv Sena was one of the 19 opposition parties which boycotted the President’s address ahead of the Budget Session on January 29 and extended support to the farmers’ agitation.

Of late, thousands have converged in support of the ongoing stir against the contentious new farm laws.

Initially, farmer unions had maintained that their protests were apolitical but have lately welcomed politicians openly.

Rakesh Tikait on January 31 had said the Sanyukta Kisan Morcha (SKM) had not allowed political parties in the movement against new central farm laws but took political support only after the democracy was mocked at protest sites.

Meanwhile, concertina wires spread further around the UP Gate (Ghazipur border) on Tuesday, while multi-layered barricading of iron and concrete structures along with nails studded on roads made sure no protestor movement towards Delhi.

The internet also remained suspended at the protest site.