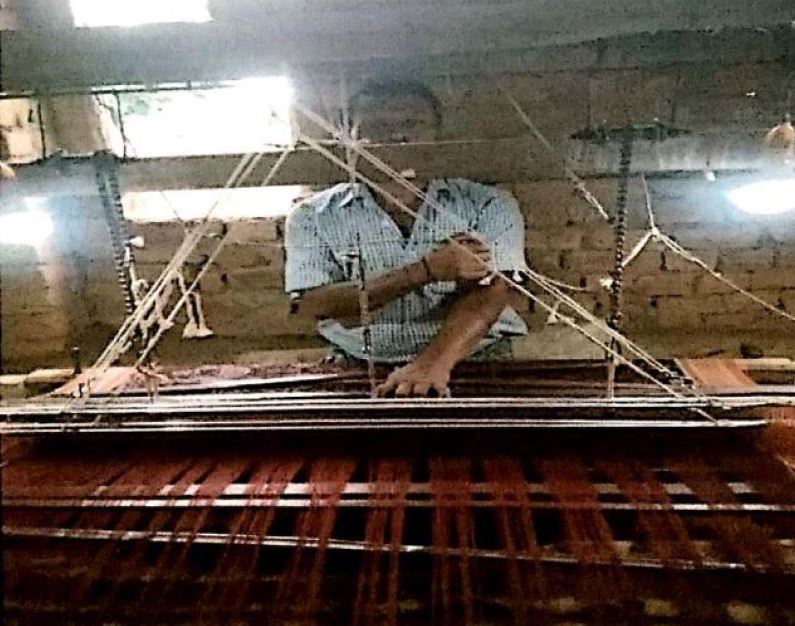 The weavers associated with handloom are weaving the fabric of their life. In the same vein, by weaving tie dye sarees, the life of Mr. Sanjay has also become happy. This story is of Mr. Sanjay Meher, resident of village Singhoda of Saraipali tehsil of Mahasamund district. Who are doing their traditional business weaving since childhood. Mayuri sarees made by him have a great demand in the market. The specialty of this saree is that the saree is prepared in two days by giving the dabi design in the edge of the saree, flowers in the pallu and animal motifs in the saree. By weaving it, they get a weaving wage of 1200 rupees. He told that from the time of his father and grandfather, he used to weave two saris and sell them from village to village. Due to this, he used to earn 500 to 1000 rupees, due to which his entire family could hardly bear the expenses. Mr. Sanjay told that today he is weaving different types of sarees like paper, mahali, babata, tie dye sarees of designs. The weaving of these sarees gives a weaving wage of two and a half to three thousand rupees per sari, due to which today they are able to educate their one son and two daughters and support their family very easily with the income earned from weaving. Huh. Today he has 4 acres of cultivable land, a motor cycle and his own pucca house, all this has been possible only through the income from weaving. Shri Sanjay Meher has joined the Weavers Committee since 2010-11 and is engaged in weaving sarees of various designs. He told that he is doing weaving Odia Tie Dye Saree since last 40 years. Today tie dye Sambalpuri sarees are prepared by them ranging from 1000 to 10,000 rupees. He said that he had received instructions from the senior officers of the Village Industries Department to produce the pattern of sarees belonging to Odisha province in the border districts of Chhattisgarh. Under which Kadambani sarees were prepared and presented by the weavers members of Virendra Bahadur Weavers Cooperative Society Maryadit Saldih. Which is being sold in Bilasa handloom. Due to this, the weavers are getting an economic increase in their income. Like this:Like Loading… Continue Reading