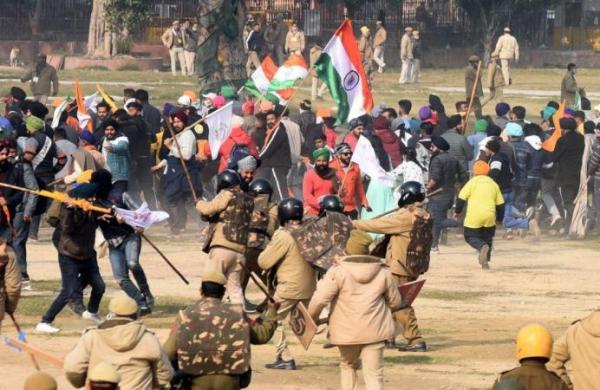 By PTI
CHANDIGARH: The Samyukt Kisan Morcha on Friday sought a judicial probe into the violence that occurred on January 26 in Delhi during a tractor parade held by protesting farmers demanding the repeal of the Centre’s three contentious agriculture laws.

“We demand a high-level judicial probe into the incident that happened on January 26 where a peaceful ‘kisan parade’ was intentionally disrupted and the route was blocked under a deep-rooted conspiracy hatched by the Delhi Police at the instance of Union government,” Morcha’s legal panel convener Prem Singh Bhangu said here.

The Samyukta Kisan Morcha (SKM) is an umbrella body of 41 farmer unions protesting the farm laws.

The SKM’s legal panel also denounced the alleged repressive measures and violation of human rights by the Centre and the Delhi Police to foil the “peaceful” agitation of farmers at the borders of Delhi.

Bhangu along with other members of the legal panel demanded immediate release of the farmers lodged in different jails of Delhi and withdrawal of “false cases” registered against farm leaders and farmers.

The panel also demanded scrapping of notices being issued to farmers in Punjab, Haryana, Rajasthan, Uttar Pradesh and Uttrakhand “under the garb of joining investigation with intention to implicate them in false cases”.

More than 20 FIRs have been registered against suspected and unidentified persons in which police are intending to involve innocent people by issuing notices, Bhangu said.

The legal penal called upon the farmers not to be afraid of the notices and repressive measures being taken by police and not to join the investigation and also not to respond to the notices.

Bhangu said as on Friday, 125 farmers out of 151 have been released on bail and others are likely to be released as their bail applications are pending for hearing.

The tractors and other vehicles which were illegally retained by police need to be released as early as early possible, he said.

The legal panel is also considering to initiate legal action against police officers responsible for torture and causing injuries to farmers, Bhangu said.

A tractor march meant to highlight farmers’ demands was dissolved into anarchy on the streets of the national capital on January 26 as hordes of rampaging protesters broke through barriers, fought with police, overturned vehicles and delivered a national insult — hoisting a religious flag from the rampart of Red Fort, a privilege reserved for India’s Tricolour.

Tens of thousands of protesters had clashed with police at multiple places, which led to chaos at well-known landmarks of Delhi and suburbs, amid waves of violence that ebbed and flowed through the day, leaving the farmers’ two-month peaceful movement in tatters.

Farmers, mostly from Punjab, Haryana and western Uttar Pradesh, have been camping at several Delhi border points, including Tikri, Singhu and Ghazipur, since November 28, demanding a complete repeal of three farm laws and a legal guarantee on the minimum support price for their crops even as the Centre claimed that these were for the benefits of the farming community.