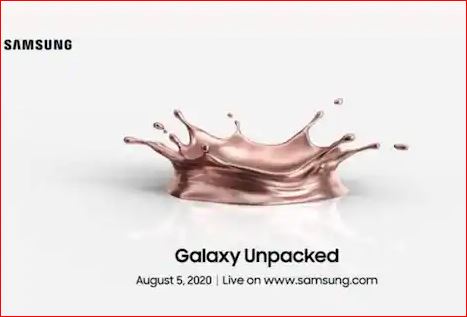 Samsung has officially confirmed the date for its upcoming Unpacked event, which could very well be when the company officially unveils the Galaxy Note 20 smartphone. The Samsung Unpacked 2020 Event will be a virtual event this time and will be live on August 5. Samsung doesn’t say much on what is being launched, except that “latest ecosystem of Galaxy devices” will be unveiled. But on the menu are expected to be the Galaxy Note 20 series which is expected to include an Ultra or Plus variant as well, and perhaps even the Galaxy Fold 2 foldable phone.

One of the expected launches is the Galaxy Note 20. It is believed that this year’s Galaxy Note will include a 120Hz display, offer 8GB and 12GB RAM variants and as much as 512GB storage options. Samsung also believes in expandable storage, so that could perhaps be an option as well. The Qualcomm Snapdragon 865 processor is expected to power this in most countries, though we still don’t know if there will be an Exynos variant as well for markets such as India. The Galaxy Note 20 Ultra could also be launched, and may perhaps sport the 108-megapixel camera, much like how Samsung defined the Galaxy S20 series earlier this year.