Sampath creates a story of prosperity with MNREGA 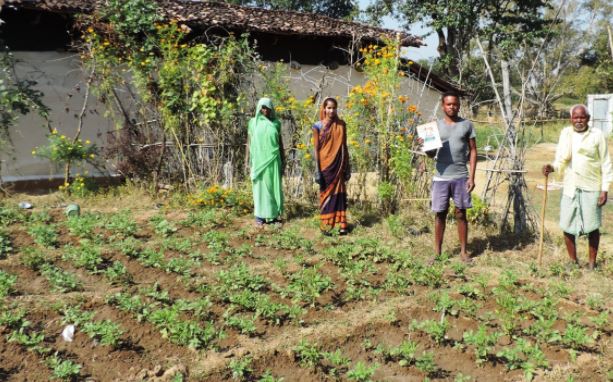 Working people create the story of prosperity by finding the right path and resources. Shri Sampat Singh has one such family in Pipariya of Korea district, moving towards prosperity. This family, which has been in the line of unskilled labor for the maintenance of the family after Kharif farming, has got the means of water harvesting in the form of Dabri from the MNREGA (Mahatma Gandhi National Rural Employment Guarantee Act). The way itself has changed.

The family of Shri Sampat Singh of Pipariya village of Manendragarh development block is no longer worried about employment in the months following the rains. After getting a small water supply from MNREGA, his family is on the path of economic progress. After making Dabri, they took twice the yield of paddy, and now they are growing income by cultivating tomato and chilli along with potato in their garden.

The family of Mr. Sampat Singh consists of four members including mother Mrs. Mankunwar, father Mr. Budhu Singh and wife Mrs. Sunita. Regarding construction of Dabri in his farm, Mr. Sampat says that there is a total of eight acres of agricultural land in the village named after his father, out of which four acres are adjoining the house. Due to lack of means of irrigation, the entire land was irrigated. Since his uncle and other farmers in the village became Dabri in the fields, his change in farming and life inspired him to make Dabri in his farm. With the help of the Gram Panchayat, Dabri has been built in their field from MNREGA. They are preparing to plant wheat as a rabi crop this year due to Dabri.