Samajwadi Party candidates list starts with those in jail and ends with those on bail, says Anurag Thakur 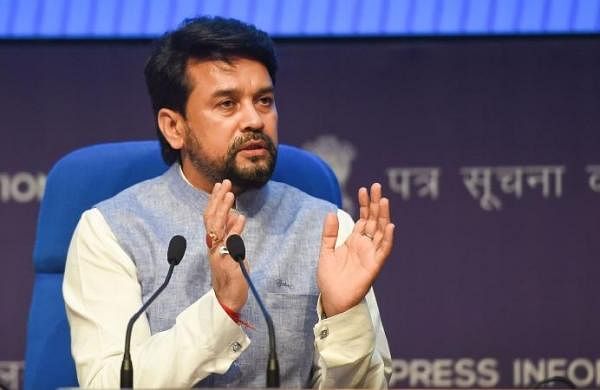 BHOPAL: Hitting out at the Akhilesh Yadav-led Samajwadi Party (SP), union minister Anurag Thakur said on Sunday, “If you see SP’s list of candidates, it starts from those in jail and ends with those out on bail.”

“The game of jail-bail is the real ‘khel’ (game) of the SP. One of their MLA and candidates Nahid Hasan (candidate from Kairana) is in jail, while the other legislator, Abdullah Azam Khan is out of jail on bail,” Thakur said in Lucknow just after 1994-batch IPS officer and former Kanpur police commissioner Asim Arun joined the saffron party.

Focusing on BJP’s prime poll plank – the improvement in law and order and crackdown against criminals and anti-social elements in the five years of Yogi Adityanath rule – the union minister (one of the three central BJP leaders appointed co-incharge for polls in UP) said, “Those who indulge in riots go to the SP, while those who catch the rioters, join the BJP.”

Welcoming the ex-IPS officer Asim Arun in the party fold, Thakur said, “Today’s development has made it clear that officials with clean image are joining the BJP, while those indulging in riots are joining the SP.

Importantly, the two-time sitting SP MLA from Kairana seat of West UP’s Shamli district, Nahid Hasan was sent into 14-days judicial custody by a special court on Saturday, after the state police invoked the stringent Gangsters Act against him. The other SP leader Abdullah Azam Khan (the son of ex UP minister Mohd Azam Khan who won from Suar seat in 2017 polls) was released on bail on Saturday from Sitapur Jail, after almost 23 months behind bars in 40-plus criminal cases ranging from extortion to forgery.

On Sunday, the 1994 batch IPS officer and former Kanpur police commissioner Asim Arun joined the BJP in Lucknow in presence of union minister Anurag Thakur and state BJP president Swatantra Dev Singh. Asim Arun is the son of former UP DGP Sriram Arun. His sister Rashmi Arun Shami is a senior IAS officer of Madhya Pradesh cadre, while his MP cadre IPS officer brother-in-law Sanjiv Shami has long been counted among one to the top anti-terror cops in the country.

Both Asim Arun and brother-in-law Sanjiv Shami have headed the anti-terror and counter terrorism wings of UP and MP police respectively in the past.

On January 10, the UP government had approved the voluntary retirement request of Kanpur police commissioner Asim Arun, who had applied for premature retirement amid speculation of his entry into active politics. As per informed sources within the ruling BJP, the 1994 IPS officer is likely to be fielded from one of the seats of Kannauj district.

Besides the former police officer, ex-IAS officer Ram Bahadur also joined the BJP, along with two SP MLAs Ghanshyam Lodhi and Shailendra Pratap Singh on Sunday. The former IAS officer Ram Bahadur had contested the 2017 polls in UP as BSP candidate from Mohanlalganj seat of Lucknow district, but lost by slender 530 votes margin.

On the other hand, ex-minister of Yogi Adityanath government and former BJP MLA from Madhuban seat of Mau district, Dara Singh Chouhan, who had quit the saffron party recently, joined the SP officially on Sunday.

Speculations are also rife about SP patriarch Mulayam Singh Yadav’s younger daughter-in-law Aparna Yadav (wife of Pratik Yadav, who is the son of MSY’s second wife Sadhna Gupta Yadav) likely to join the BJP soon. Aparna, who is the daughter of veteran journalist Arvind Singh Bisht had lost by around 34,000 votes on SP ticket against BJP candidate Rita Bahuguna Joshi in the 2017 polls from Lucknow Cantt seat.

Meanwhile, reacting to ex-IPS officer Asim Arun joining the BJP on Sunday, the SP chief Akhilesh Yadav said, “the development has exposed how police officers influenced by the BJP were holding senior police positions in the state. I’ll complain to the Election Commission, demanding that all those cops who worked with Arun in the last five years be removed from active posting, failing which they would work as BJP agents. If the EC doesn’t order removal of all such police officers, then the impartiality of the election body will come under doubt.”