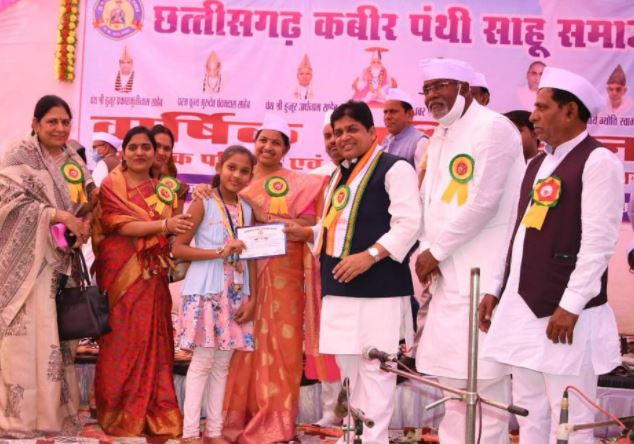 Shivkumar Dahria attended the state level youth-youth introduction conference and seminar of Kabir Panthi Sahu Samaj in village Semaria of Arang assembly constituency. He said that the speech of great men is always going on the path of truth and non-violence. Kabir Saheb always opposed lies and pageantry. Were against heresy and chose the path of truth. Like Kabir, Baba Guru Ghasidas also preached Satnam and became immortal. Therefore, the number of followers of Kabir Sahib is increasing. People from other societies are adopting them. Sahu society has adopted Kabir in large numbers. Due to this, many changes will be seen in the people of Sahu society with ideas. The society will move forward in the path of progress.
Minister Dr. Dhariya further said that work is being done in the direction of the Chief Minister towards the development of people of all societies in Chhattisgarh. The work of saving Chhattisgarhi tradition, culture and heritage is being done. Sahu society’s contribution is also in the development of Chhattisgarh. He said that Sahu society is constantly growing in the path of progress. Along with being a large number of farmers in the society, there are people of other important positions in the society. He said that by organizing the youth-youth introduction conference by the Kabir Panthi Sahu Samaj, not only the example of social unity is being given but also a commendable effort is being made to remove the unnecessary fanfare and the practice of liking the bride after going home. He praised Sahu Samaj for this. Minister Dr. Dhariya said that he has sanctioned maximum buildings for Sahu Samaj in Arang Development Block area. The building can be used for development of education and other works besides social work. He also assured a building for the society at the block headquarters. The MP Smt. Chhaya Verma presiding over the program said that Kabir Saheb is a great man. Great men do not belong to any one society, they all belong to the society. They are similar to the ocean. Therefore, everyone should adopt his voice and message. He said that Sahu Samaj is like an engine in OBC category. By taking a decision more than one, the other also learns the society. Society will move forward with such an event. Special guest at the program Dharsiva MLA, Mrs. Anita Yogendra Sharma, District Panchayat President Mrs. Domeshwari Verma, District President Mr. Khilesh Dewangan, Sarpanch Mr. Manish Sarang were also addressed. During this time, the patrons of the society Roop Kumar, Nirmal Kumar, Santosh Sahu, Kanhaiya Lal Sahu etc. were present. Minister Dr. Dhariya also honored the meritorious students of the society.